I have decided that this is the year when I am going to make more of an effort to join in all of those group activities going on in the book blogging world. I haven’t been much of a joiner to date, but I’ve already spotted several great looking challenges/events that I want to get stuck into. So here’s my list of fun…so far. 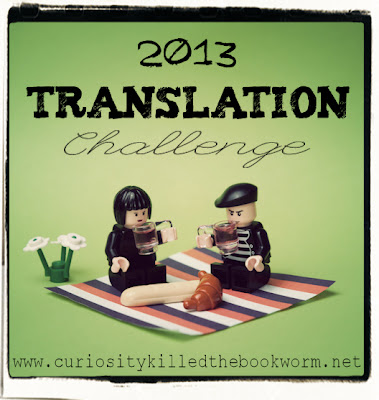 2013 Translation Challenge hosted by Ellie of Curiosity Killed the Bookworm

The aim is simply to read one book that is translated into English from another language per month, every month. Seeing as how I had recently concluded that I am a bit rubbish at reading translations, this is the ideal challenge for me, and I have already started reading my first translated book of 2013: Aunt Julia and the Scriptwriter by Mario Vargas Llosa. There is an optional additional challenge to read 12 books translated from 12 different languages. That might be tough, but I won’t say no just yet.

Crime and Punishment read-a-long hosted by Wallace of Unputdownables

The thing is, I tried reading this in December and those first 80 pages dragged, I hated the main character, it was all predictably depressing and I decided life was just too stressful at that time to make myself read something that got me down. But I do still really want to read it and it just happens that this read-a-long is scheduled for February and March, which seems like the only way I’m likely to tackle it again any time soon. Also, it’ll count towards the translation challenge! And the Rory Gilmore Reading Challenge (see below).

I actually posted about this ginormous ongoing challenge (not unlike the Boxall’s 1001 Books You Must Read Before You Die list) last July, but failed to read anything from it until last week. I think a sensible aim would be 12 books this year. At which rate it will take me 20+ years to complete, but that’s not really the point of giant long lists like this, is it? This is almost cheating, as I’d already decided the TBR was too unwieldy for me to be allowed to buy new books until I made a dent in it, but this challenge is specifically about digging out those older books that have sat on the TBR for far too long. And I have to post a list of the books I aim to read, so here goes:

1. A Novel Bookstore by Laurence Cossé
2. Breakfast of Champions by Kurt Vonnegut
3. The Confessions of Max Tivoli by Andrew Sean Greer
4. Immortality by Milan Kundera
5. Other Colours by Orhan Pamuk
6. Chasm: a Weekend by Dorothea Tanning
7. On the Road by Jack Kerouac
8. A Paper House by Mark Thompson
9. The White Tiger by Aravind Adiga
10. Dan Yack by Blaise Cendrars
11. The Stories of English by David Crystal
12. The Heart of the Matter by Graham Greene

I will also be joining in at least one Bloggiesta, giveaway and read-a-thon, so let me know if there’s any coming up. I also have an idea for a little challenge for myself involving all those rarely opened cookery books in our kitchen, but more on that another time. Do you do challenges etc? Which ones caught your eye this year?