It’s not been my best reading month, or at least it started badly. I think I set my aim too high in the Popular Science Reading Challenge, expecting myself to read one book every month in an unfamiliar genre. Last month I struggled a little with 13 Things That Don’t Make Sense by Michael Brooks and this month I started and gave up on The Simpsons and their Mathematical Secrets by Simon Singh (I thought as a fan of The Simpsons and someone who loved maths at school it would appeal but it really really didn’t do it for me; however several people I know have read and enjoyed it so what do I know?!). I’ve revised my aim down to 6 books this year, which takes the pressure off. And might mean I actually read something from the TBR next month!

On a more positive note, I signed up to a Kickstarter called Women Destroy Science Fiction! I know, the title alone was enough without learning the details, but it turns out those are fab too! Lightspeed Magazine has been publishing science fiction short stories and related non-fiction since 2010 and they proposed an issue written and edited entirely by women, as a means of combating the tired cliché that women can’t write good SF. The campaign was so successful that they are also producing women-only issues of their sister publications Nightmare Magazine (Women Destroy Horror!) and Fantasy Magazine (Women Destroy Fantasy!). As part of my Kickstarter reward I got digital copies of some back issues of all three magazines (the women-only issues will follow later this year) and I started reading them while on holiday. So far they are excellent. I really like the way the essays are thematically linked to the stories. 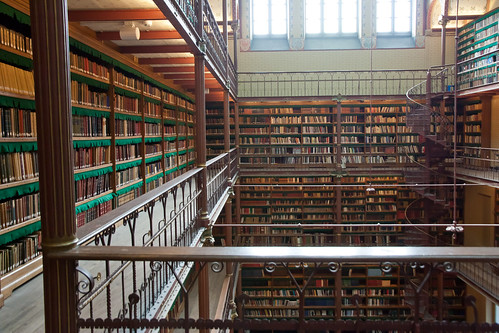 Speaking of holiday, we had an awesome holiday in Amsterdam this month and I still have LOADS to blog about it. I’ve sorted through about half the photos and prepared two blog posts, which is probably enough for now, but there’s lots more to say.

As if that wasn’t enough for one month, this past weekend was Bloggiesta. I had a growing todo list already for the blog so I thought it would be a good idea to take part. Unfortunately I had some problems with my FTP server and internet connection, which meant I got stuck on one of the first tasks I started for a whole day (backing up the blog). Oops. I have investigated better ways so hopefully next time it will work more smoothly.

A Spell of Winter by Helen Dunmore (review here)

The Lathe of Heaven by Ursula le Guin (review to follow)

Hawkeye Volume 1 by Matt Fraction (the hardcover, which, because comics are complicated, is a different collection from the paperback volume 1)

“Snapshots I brought back from the black hole” by K C Ball (Lightspeed Magazine, Issue 13, June 2011)

“On keeping a notebook” by Joan Didion (Selected Shorts podcast)

As I’m posting this about a minute before midnight, happy April!