A friend suggested I blog about this after it was almost all I talked about when summarising our holiday! It certainly made a big impression on me. 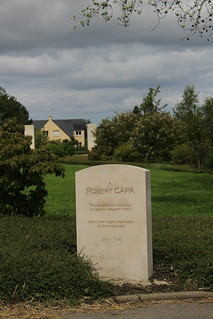 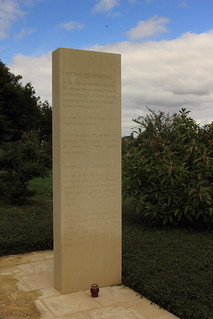 It started with a small memorial outside a museum in Bayeux to Robert Capa, a photographer whose work Tim and I are familiar with and admire, so we were interested to see something about him but also curious what claim Bayeux had to him. We continued along the path in grounds opposite the Commonwealth war cemetery and next we came to two marble slabs that said they were the entrance to a memorial to “journalists killed all over the world since 1944”, a joint project between Bayeux and Reporters Without Borders. Which seemed like a very good idea, and I walked on expecting just a peaceful garden of some kind. I hadn’t read the text properly (I think I’d tried to understand the French rather than looking at the English) so I wasn’t prepared for what came next. 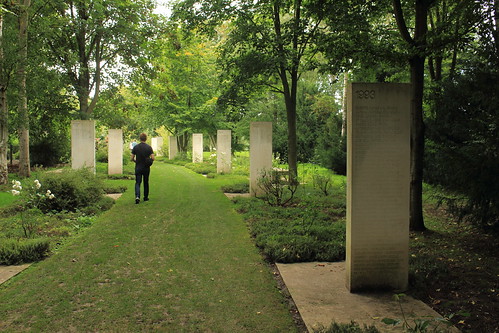 A long, tree-sheltered footpath flanked on both sides by marble slabs listing the name of every journalist killed under the year of their death (the photo above shows only a small section). It’s simple and powerful and heartbreaking, because there are so many names, and the numbers seem to be increasing. So much so that a second path has been started.

I’m not sure why this moved me more than the thousands of graves of soldiers just over the road (which was also pretty disquieting), but somehow it did. I could argue that soldiers sign up for the possibility of death, but of course in World War Two most of them didn’t get a choice. In fact, reporters have more choice about whether or not to go to a war zone, but then not all of these deaths were in a war zone. For those who want more than a list of names, there is an online archive. 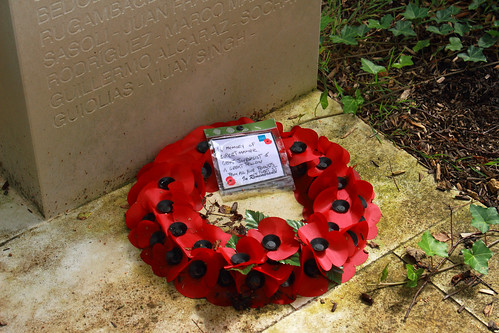 I suppose I can relate to the reporters, to their decision to tell the truth about the world. Not that I in any way consider myself worthy to stand alongside the men and women who risk their lives to make corruption, injustice and other important news known to the world, but I admire them in a way I just can’t admire a soldier. I can be (and indeed am) sad about the massive loss of life during war, but it’s not the same thing.

I don’t understand war, how anyone could take a fight to the level of massive loss of human life, and it is only through writing, both journalism and fiction, that I can at least try to comprehend. For anyone interested in what it’s like to be a reporter on war zones and other dangerous regions, I highly recommend the work of Joe Sacco, who is honest about the draw and the thrill, as well as the need to tell the stories of the real people affected.

(Back to more cheerful things, and maybe another book review, soon I promise!)