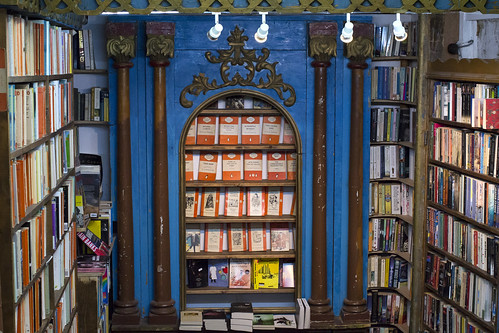 When I was a teenager, I forget which year, for my birthday I asked for money and a trip to Hay-on-Wye. For those unfamiliar with it, Hay-on-Wye is a small town in Wales that’s very pretty, surrounded by lovely walking country, but most importantly it’s full of bookshops – about two dozen of them in fact. It’s pretty awesome and that was my favourite birthday treat ever. So this year when a friend invited me to spend Easter weekend in the Brecon Beacons, including Sunday in Hay-on-Wye, I obviously said yes.

When Sunday rolled around, six of us piled into the car (which only really fits five) and road tripped our way between fields and mountains. By the time we’d lingered over lunch for two hours, we didn’t actually have that long for the bookshops themselves and only visited five or six of them (I love that there’s a town outside of London where it’s possible to say that!) but that’s partly because we spent so long in Addyman Books, a proper rabbit warren of a place, where there’s always yet another room of books around the corner. And you gotta love the Star Trek cutouts in the sci-fi room. 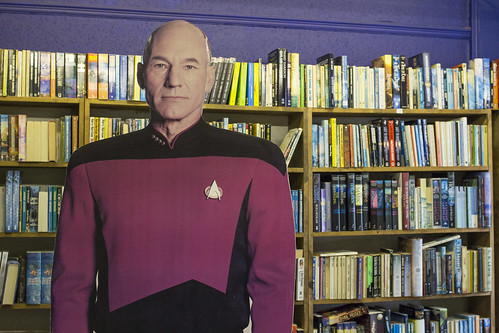 I also really liked The Tangled Parrot, which is a book and music shop in a basement, but I didn’t get any good photos of it. A place that I did get good photos of is the wonderfully named Murder and Mayhem. You can probably figure out what kind of books they specialise in! 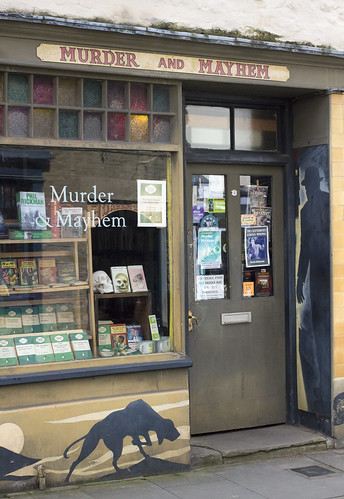 We spent a while in there admiring the decor, which includes a freaky scene made up of a lifesize waxwork and some Victoriana, not to mention reproductions of newspaper cuttings from famous real-life murders. But in the end most of my book haul came from Addyman. I tried to limit myself as I already had more to carry home on the train than was comfortable, but…books! The Vagabond by Colette (in what looks like the same design as I have of her Claudine series)
Writing Home by Alan Bennett (to date I’ve only read his novellas, which I find hilarious)
The Room of Lost Things by Stella Duffy (this was on my wishlist after reading a review of it a few years ago)
Perfume by Patrick Süskind (everyone raves about this book – you better be right!)
The Believers by Zoë Heller (random choice from the £1 book corridor)
The Subtle Knife by Philip Pullman (my original copy went missing years ago and I kept meaning to replace it so I can reread the series)

Clearly I have to go back when I have more carrying capacity and more time. Possibly when I’ve depleted the TBR a little (I’ve been pretty bad on that this year).

Anyone else been to Hay-on-Wye? What did you think?