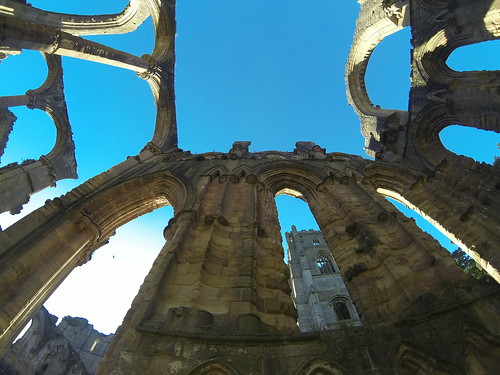 I’ve been a bit quiet on the blog because we’ve been off holidaying again. This time we’re in Yorkshire, where we’ve enjoyed a sheep fair, a brewery, some old ruins and some fancy gardens, among other things.

It’s been a really lovely week and I have even found time for reading, but I don’t plan on reviewing any of it here properly. Partly that’s because it’s all starting to blend into one. I bought the recent Neil Gaiman Humble Bundle, a digital collection of rarities either wholly or partly written by Gaiman. Among the comics and short story compilations there are some more unusual works, such as Ghastly Beyond Belief, a co-production with Kim Newman collecting notably terrible quotes from science fiction and fantasy novels. Which is hilarious.

END_OF_DOCUMENT_TOKEN_TO_BE_REPLACED

I have been tearing through comics lately, so here are some brief thoughts on a few that I most definitely recommend. The fun continues for the teenage superhero in Jersey City. Kamala uses her Ms Marvel costume to attend the school Valentine’s Day dance and bumps into Loki there, being his charming self. And after that mostly light-hearted interlude, Kamala has her first crush, which of course isn’t going to run smoothly. Her brother Aamir becomes a more rounded character than simply following the rules of society and railing at Kamala with their parents. As with the previous volumes, the comic explores real human issues around growing up and society at large through the distorting lens of superheroes and supervillains. I am thoroughly in love with this series and looking forward to what’s next for Kamala.

END_OF_DOCUMENT_TOKEN_TO_BE_REPLACED

As anyone who reads this blog/scans my reviews archive can tell, my reading leans heavily towards literary fiction. Sure, there’s a pinch of sci-fi and a touch of comics (an increasingly large touch) and a sprinkling of literary essays, but overall my reading has a clear leaning. I don’t necessarily want to change that – I enjoy most of what I read – but I would like to widen the boundaries a bit more.

A recent trip to my Dad’s house had me scouring the familiar old bookshelves and remembering how I used to read a lot of autobiographies (my Mum’s influence, I suspect) but also had phases of horror/thrillers, comic fantasy and historical romance, none of which I read a whole lot of these days. It could just be that my tastes have changed (I’m certainly more squeamish about graphic violence) but it could be that I have discounted whole sections of the bookshop through a combination of poor memory/one bad experience tainting the genre/snobbery.

END_OF_DOCUMENT_TOKEN_TO_BE_REPLACED Quiet: the Power of Introverts in a World that Can’t Stop Talking
by Susan Cain

I had been looking forward to this book for a long time. I watched and enjoyed Cain’s TED talk about introversion and I have seen many positive reviews. Perhaps I had overhyped the book to myself, but in the end I was disappointed – I felt the book was trying to be too many things and didn’t quite hit the mark.

As the title suggests, this book is about people who are quiet, or introverted. An author’s note acknowledges that Cain has followed the popular conception of introversion as an all-encompassing label for quiet people, rather than using one of the various scientific descriptions. (Personally I think that information would have been useful in the main text.)

“We all behave differently depending on the situation. But if we’re capable of such flexibility, does it even make sense to chart the differences between introverts and extroverts? Is the very notion of introversion-extroversion too pat a dichotomy…Aren’t we all a little of both?”

END_OF_DOCUMENT_TOKEN_TO_BE_REPLACED

Today is officially the last day of the Nights on the Bookstand Summer Book Bingo and I have failed to complete any more rows or columns. I tried!

For “Revolves around a holiday” I read Us by David Nicholls. For “With a happy ending” I read Rebecca of Sunnybrook Farm by Kate Douglas Wiggin, which, as I mentioned yesterday, might not strictly count anyway. For “By any Booktopia author” I’ve started but not finished Quiet by Susan Cain. And I hadn’t even chosen a book for the last square I was aiming to fill, “A presidential biography”. I was thinking of reading one of Barack Obama’s books, but Tim suggested I look outside the USA and I got completely stuck. Also I ran out of time.

END_OF_DOCUMENT_TOKEN_TO_BE_REPLACED