Inspired by Louise of Lone Star on a Lark I have been researching authors from my home town. I’ve looked before at books set in Bristol, but this is my adopted home, not where my roots are. So what about my original home of Coleford, Gloucestershire? 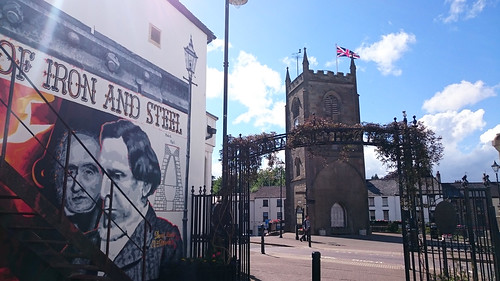 Now, Coleford is a pretty small place, a country market town of 8000 people, and a good third of those have arrived during my lifetime, so you might not expect there to be many authors with links to it. But, partly thanks to a local literary culture cultivated by the (now sadly closed) Forest Bookshop, Coleford is a bit of a writers’ hotspot.

And the more I researched, the more I found. There were some I already knew about but even more I’d either never heard of or hadn’t realised had a link to Coleford. Let’s start with the biggest name: Dennis Potter. Yes, the novelist, playwright and screenwriter behind The Singing Detective, Pennies From Heaven and Lipstick on Your Collar (to name but a few) was born in Berry Hill (a village so close to Coleford it’s practically a suburb) and went to school in Coleford. He went to the same Coleford grammar school as my mum (not at the same time) and like me, his family background was coal mining. When I was 15, the BBC and Channel 4 made a posthumous co-production of Cold Lazarus that was partly filmed in Coleford. A friend and I auditioned to be extras but neither of us got a callback. However, a family friend’s classic car did get a part!

Another alumnus of Bell’s Grammar School in Coleford was Edna Healey, who wrote very successful biographies. She was married to politician Denis Healey and I’ll admit her books look a little dry. She’s probably the only one on this list whose work I don’t especially want to read.

Probably the most prolific Coleford author was Mary Howitt, a 19th century poet who was born there. With her husband William Howitt, she wrote more than 180 books and socialised with all the great literary figures of the day. She was the original translator of many of Hans Christian Andersen’s works, including some of my favourites, such as “Thumbelina” and “The tin soldier” (she learned Danish specifically for the project). The couple were a great success and I’m very excited to learn that one of their children, Margaret Howitt, wrote a memoir of her mother. I’d love to get hold of that as it sounds like she had an interesting life.

The only Coleford author that I’ve met (aside from the local historian I lived next door to, but I’m not sure local history counts, does it?) is Shoo Rayner, a children’s author and illustrator who actually chose to move to the town, unlike all the above who were born there and moved away.

Another willing incomer is poet Paul Groves, who lived in Coleford for 25 years before moving on again to Monmouth (where I went to secondary school).

Crime novelist Andrew Taylor also moved his family to Coleford. He’s won lots of awards and even been chosen for the Richard and Judy Book Club, so I feel a little bad I hadn’t heard of him.

It’s a pretty good list, I think. And that’s just Coleford itself. How would the list look if I included the whole Forest of Dean? There’s certainly one ginormous literary star I would get to include then. But I’ll save that for a future blog post.

Thank you again to Louise for the idea. Have you read any of the above? Which writers are linked to your home town?