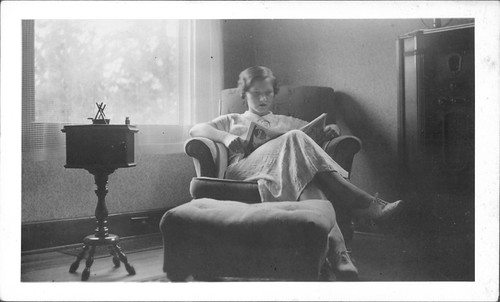 I’ve also been slowly re-reading Utopia by Thomas More. December marked 500 years since its publication, which I learned thanks to a display at Somerset House when we went to London in January. It’s remarkable how much has changed and how little, both in daily life and in aspirations. I don’t agree with all More’s ideas for an ideal state, but there’s certainly plenty there to be frustrated that in 500 years we haven’t figured out how to be a happier, more equal society.

Anyway, on to the books I actually finished reading this month.

Ivy by Sarah Oleksyk
This is a rather lovely graphic novel about being a misunderstood teenage girl. I liked that Ivy is difficult, to be honest she’s an outright bitch, and not in a giggly Hollywood way. Oleksyk’s story and artwork fill in the detail of why she acts the way she does and takes us on the journey with her to learning how to maybe…not be a bitch.

Negroland by Margo Jefferson
This is somehow both experimentally lyrical and drily historical at the same time. It’s a non-fiction narrative about black elite society in America from the 1940s to the 1970s. Jefferson slips between first and third person as she both is and isn’t the focus point of her own memoir. Informative, but distancing.

The Price of Salt by Patricia Highsmith
I loved this book. Completely and utterly. It’s the love story of two women – young, inexperienced Therese and older, mid-divorce Carol – in 1950s New York. It is beautifully written, moving and incredibly readable.

Apple Tree Yard by Louise Doughty
This recent thriller is also very readable but I did have reservations. I’ve read a few comments on how its main character – a middle-aged woman who has an affair – is punished over and over again for her promiscuity, and maybe that’s what I found uncomfortable. Certainly an intelligent, well written book.

HERmione by Hilda Doolittle
This might be the epitome of literary – a strange, repeating, myth-referencing auto-fiction about a young woman called Hermione who is emotionally fragile. She has returned home after failing her university exams and keenly feels the disappointment to her family. She is wooed both by a young man she has known a long time and a woman she has just met, and neither of them does her psychological state any favours. I adored this but it’s going to be as much of a challenge to review as it was to read!

How was your February?