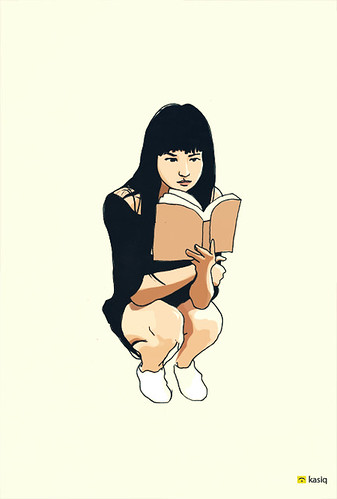 Compiling this blog post I realise I’ve read a lot of comics this month. I have to some extent been saving my brain space for learning Japanese before the big trip to Tokyo, which is now three weeks away (eek!).

I am enjoying winter so far – perhaps because it’s been mostly dry. I love a cold, dry day. It’s lovely to be outside in it, but it’s even better to be indoors looking at it! And of course, the long dark nights are a great excuse for curling up on the sofa with a book or TV show.

Apollo by Zack Scott
This is a book of infographics of the Apollo space programme. It’s beautiful and thorough. I reviewed it for Physics World, so take a look over there next week for my further thoughts.

Ms Marvel, Vol 5: Super Famous by G Willow Wilson (writer), Takeshi Miyazawa, Adrian Alphona and Nico Leon (artists)
I love this series. Although Kamala Khan’s secret identity remains a secret, the existence of a new superhero in Jersey City is not. Kamala must learn to deal with Ms Marvel being public property, to be used and abused by the people she is trying to help. And she must learn that she is still a teenager and can’t do everything. This has a lot of parallels with Spider-Man, of course, but the characters are original enough that it doesn’t matter that the story arcs are a little less original.

Silver Surfer, Vol 1: New Dawn by Dan Slott (writer) and Mike Allred (artist)
Tim was really keen for me to read this title. I don’t think I’m as sold on it as he was but it is fun and very different from other comics I’ve read. The Silver Surfer has a complicated origin story, but thankfully our point of view is Dawn, a young woman from Earth who never wanted to leave home but now finds herself far out in space with aliens and all-powerful sentinels.

Ms Marvel, Vol 6: Civil War II by G Willow Wilson (writer), Takeshi Miyazawa and Adrian Alphona (artists)
This volume opens with a tri-state science fair, and who should Kamala find on one of the opposing teams, but Miles Morales? She knows exactly who he is, but he has no idea that she’s Ms Marvel. Of course, when villains intervene, they’re both called upon. As the title suggests, this forms part of the overarching Civil War II story arc across all Marvel comics, which I haven’t read any of the rest of. I wasn’t lost, but I didn’t enjoy this as much as previous volumes.

The Evenings by Gerard Reve
This is apparently a classic comedy in its native Netherlands, but I was not impressed. I did laugh a couple of times but mostly I was bored/irritated by this story of a young man who is finding the winter evenings tedious. He’s not nice or interesting and nor are his friends.

The Girl on the Train by Paula Hawkins
This is a quick, easy read and a pretty good thriller. Not amazing, not the greatest writing, but a fun mystery and an unreliable narrator of the classic mould. This book has lovers and haters, I know. I wouldn’t put myself in either camp, but I would say I enjoyed the experience.

Yes Please by Amy Poehler
This is somewhere between a memoir and a collection of essays. I liked it, but not as much as I had hoped. I wasn’t hoping for a tell-all (which this certainly isn’t) but I guess I was hoping for more than “this is why I love comedy”.

FLCL Volume 1 by Gainax (writer) and Hajime Ueda (artist)
Yes – this month I read my first manga. It was weird. Naota is missing his older brother, who has gone to America to play baseball, and is being followed around by his brother’s ex-girlfriend. Then one night he gets into a fight with an alien and after that robots keep appearing – alien robots that are either being encouraged or fought back by the mystery girl. It took me some time to figure out that much. To call this abstract is an understatement. But it’s a lot of fun.

Giant Days Volume 4 John Allison (writer) and Max Sarin (artist)
This is another series that I love. Room-mates Susan, Daisy and Esther are still battling through their first year of university. They’re learning to deal with recent romantic break-ups. It’s all very sweet and relatable and funny.