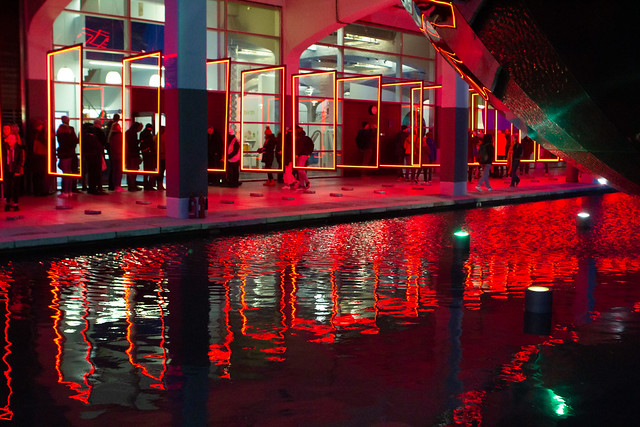 February dragged on forever and then was suddenly over. We’ve had endless rain and wind, but the month ended on a high note for me. On Friday, Greta Thunberg came to Bristol to lead the Youth Strike 4 Climate. I went along to hear the speeches and join the first part of the march and it was amazing.

This weekend is also Bristol Light Festival, with a series of light-based sculptures around the city. It’s currently quite small, but I’m hoping it’s proved enough of a success to become an annual event, like the one in Amsterdam.

This month we went to see Parasite, which we not only loved but are continuing to analyse every detail of two weeks later. It is such a good film. And I went to see a screening of The Cabinet of Dr Caligari with live improvised musical accompaniment. Those 1920 film sets are gorgeous!

On the reading front, I seem to have continued my slowed-down pace of one book per week. I know for most people that would be plenty, but for me it seems very little. Thankfully, the books I did read this month were all great.

Kitchen by Banana Yoshimoto
translated from Japanese by Megan Backus
This novella and short story about grief are an excellent demonstration that you can depict dark, devastating emotion without being hyperbolic or overwrought. A series of young people have lost a significant person from their lives and we see their varied reactions and attempts to handle their grief. It is beautifully understated, strange and at the same time completely relatable.

Dark Days by James Baldwin
This Penguin mini book contains three of Baldwin’s essays that directly address race and racism in the USA, from 1965, 1980 and 1985. They are insightful, moving, angry and move between hope and despair.

Kitchen Confidential by Anthony Bourdain
The book that made Bourdain famous is a highly entertaining memoir about his career in the restaurant business, from washing up as a summer job, to being a head chef far too young to make a success of it, to his drug problems and clawing his way back up to the top job. It’s a fascinating book and I will write a longer review soon.

Cairo by G Willow Wilson (story) and M K Perker (art)
In this graphic novel, a disparate group of Middle Eastern and American characters are thrown into an adventure that manages to incorporate local and international politics, smuggling, religious conflict and magic. The story is fun and exciting, while also dark and making a serious point. There were a few moments when I felt Wilson had tried to pack too much in, tick too many boxes, but overall I enjoyed the ride. And Perker’s art is packed with great details.