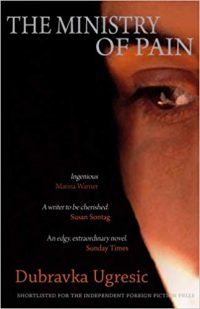 This book started really strong for me and then tailed off. It has a lot of interesting things to say about language, story and identity, but two unfortunate decisions toward the end undermined my pleasure. This is my Netherlands read for the EU Reading Challenge.

Tanja Ludic left her home in Zagreb during the 1990s Yugoslav civil war. A few years later she is teaching Servo-Kroat at the University of Amsterdam, a temporary contract and almost certainly a temporary subject. She quickly realises that all her students are floundering, most of them like her are refugees from a forever-changed homeland. So she expands her course to cover “Yugo” culture, in fact any memories that her students will share with her and each other.

Initially, the novel flits between these recollections and Tanja’s musings on language, on life in Amsterdam, on being a migrant. As she gets to know her students, they become a larger part of her life and the story. But events conspire to prevent this from becoming the cosy situation she craves.

“My fellow countrymen communicate in a kind of half-language, half swallowing their words and uttering semi-sounds…Conversations among my compatriots seem long, exhausting and devoid of content. Instead of talking, they seem to be stroking each other with words, spreading a soothing, sonorous saliva over one another…And there’s the larger question of whether a language that hasn’t learned to depict reality, complex as the inner experience of that reality may be, is capable of doing anything at all – telling stories, for instance.”

It was interesting to read this so soon after having spent time in Amsterdam. Tanja’s Amsterdam is rougher and seedier than either of my visits there, and I’m not sure if that is down to the city having changed in the past 20 years, or the fact that I didn’t visit the non-touristy places where most residents actually live.

Through Tanja, Ugresic analyses the language(s) of her former country. Is it one language with dialects? Three (or more) languages that overlap so heavily that their speakers can all understand one another? I love explorations of language. And the perspective of refugees from the Yugoslav civil war is not one I have seen or heard much at all, despite it being a major conflict that happened during my lifetime.

“The war gave rise to ‘differential dictionaries’. Serbs, who had for the most part converted to the Roman alphabet, started going back to Cyrillic; Croats, eager to make Croatian as Croatian as possible, introduced a few awkward constructions borrowed from the Russian…It was a divorce full of sound and fury. Language was a weapon after all: it branded, it separated and united. Croats would eat their kruh, while Serbs would eat their hleb, Bosnians their hljeb: the word for bread in the three languages was different. Smrt, the word for death, was the same.”

Unusually, I preferred the first half of the book, where very little is happening, to the more story and event-driven second half. After long intellectual riffs on many interesting topics, it felt strange to jump from one major event straight to a trip to the Hague to see the trial of one of the former Yugoslavia’s war criminals; from there to a betrayal by a student; from there to a change in Tanja’s circumstances; from there to another big scene.

But I think I would still have thoroughly enjoyed this book if it weren’t for two things near the end. I guess this may constitute spoilers so if you don’t want to know, here’s your spoiler warning.

One is that a female character accuses a man of rape who has not raped her. I know this is fiction, but I am also very aware that in the real world this is a situation many people think is common, and is a major reason why so few rape accusations lead to convictions. I’m not going to go into detail here but suffice to say that false accusations of rape are likely to be rare, and public perception to the contrary is exacerbated by every TV show, film, newspaper column or novel that perpetuates the myth. It’s irresponsible and honestly in this book a completely unnecessary addition.

The second is a chapter written in the plural first person (“We are…”) about a neighbourhood in Amsterdam that is almost entirely home to immigrants. That itself is not a problem. However, I found a lot of the choices of phrasing and details racist, perpetuating stereotypes. Again, it was unnecessary and a weird jolt from the narrative.

There is a lot of beautiful, thought-provoking writing here. I am willing to give Ugresic another chance, if anyone can recommend any of her other books?