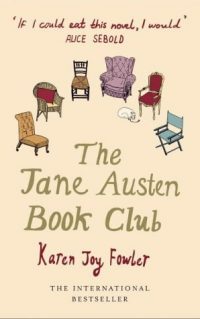 I picked this book from my TBR because I suspected it would be light and fluffy and that was all I felt capable of reading this past week. It was exactly right.

I should say upfront that I am not a big Jane Austen fan, and have not read all her works, and that didn’t impede my enjoyment of this book. In fact, it gently mocks those characters who are major Austen fans – then again, it gently mocks all its characters. I have read four of Austen’s six novels, but if you were to come to this as a complete Austen newbie, Fowler includes synopses and select quotes from literary critics at the end of the book.

The format is that each chapter is based around a meeting of the book club – so it’s a new month, a new book and a new setting (the club’s six members take it in turn to host). As is perhaps predictable, the earlier chapters contain more earnest dissections of Austen’s work, while later on it is the club members’ lives that are being analysed, for the most part.

They’re a disparate group to begin with. The club is started by Jocelyn, a middle-aged dog breeder who is worried about how her childhood friend Sylvia is handling the break-up of her marriage, so she decides this will be a useful distraction. I’m not sure that Austen’s concentration on love and marriage is actually the best distraction for Sylvia, which of course tells us something about Jocelyn.

“Each of us has a private Austen. Jocelyn’s Austen wrote wonderful novels about love and courtship, but never married. The book club was Jocelyn’s idea, and she handpicked the members. She had more ideas in one morning than the rest of us had in a week, and more energy, too. It was essential to reintroduce Austen into your life regularly, Jocelyn said, let her look around. We suspected a hidden agenda, but who would put Jane Austen to an evil purpose?”

As well as these two best friends, the club includes Sylvia’s daughter Allegra. She’s a 30-year-old high-school Spanish teacher who is also getting over the break-up of a long-term romance, though she is much less inclined than her mother to talk about what went wrong. There’s also Allegra’s friend and colleague Prudie, the youngest member of the group and the only one who is happily married. She is not an Austen fan, much to the older ladies’ consternation.

The oldest member of the group is Bernadette, who has been married several times and still believes in romance. She can tend to be a little rambling. And then finally there’s Grigg, the sole man invited and the unknown factor, as he is an acquaintance only of Jocelyn’s. The group are suspicious of him as a man and as a newcomer to Austen.

While I wasn’t hugely invested in the minutiae of the characters’ lives, I did find this book very funny. There’s snobbery about genre fiction, the awkwardness of a host not knowing how to get rid of their guests, teachers observing their students’ lives, not to mention the polite disagreements about Austen. Of course, the best humour is grounded in pathos, and this book touches on grief in many forms. And if you’re enjoying the sense of humour, I do recommend you keep going after the epilogue because Fowler’s Austen synopses, and her book group questions posed by the six members of the Jane Austen Book Club, are truly laugh-out-loud funny.

The one thing I found odd is that the book is narrated in the plural first person – “we” – but it refers to all six members of the group in third person. I never quite got over trying to figure this out, it always seemed strange. If the “we” is actually one person, it’s probably Jocelyn as it tends to take her viewpoint, but why the plural form then?

If you do know a little Austen, even just the plots from watching TV or film adaptations, then there is some pleasure to be had from the analysis dripped in-between the book group’s own dramas. While most of the group are self-proclaimed Austen fans, they all have their criticisms. We’re talking along the lines of “Is the marriage of Emma and Mr Knightley really a satisfying ending?” rather than dissertation-level stuff, but it is interesting. I was reminded that there is much to admire about Austen, even if I find her writing dry (yes, even the funny bits).