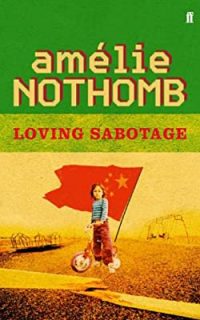 I really love Amélie Nothomb. Which meant she was a no-brainer as my Belgium choice for the EU Reading Challenge. Not that this book is set in Belgium. Like many of her novels, this is a semi-fictionalised account of Nothomb’s childhood moving around the world thanks to her father being a Belgian diplomat.

In this case, Nothomb is recalling the time she spent living in China in 1972–1975. She was just five when they moved from Japan to a tightly controlled compound in Beijing (or Peking, as it was then known). They shared this large residence with many other diplomats’ families, and the perceived safety of having armed guards on the gate meant that all the children were largely left to play in the yard with each other whenever they weren’t eating, sleeping or at school. It could have been idyllic, were it not for children’s tendency to be vicious to one another.

But you would be forgiven if it took you half of this novella to figure out that is what is going on. While she occasionally acknowledges that the compound’s adults were dealing with complex politics at work and between each other, this story is entirely about the children and what Nothomb personally experienced. And she was largely playing pretend.

In fact, Nothomb writes so thoroughly from her child’s eye perspective, that she takes completely seriously those things that she had make-believed to be true at the time. So her bicycle is a horse triumphantly galloping across Tienanmen Square. Her crush on a beautiful haughty new girl is epic love. And the ongoing game that the children all play is full-on war.

“I needed parents, enemies, and comrades-in-arms. To a lesser extent, I needed slaves and spectators – noblesse oblige. Anyone not belonging to the above categories might as well not have existed, and friends even less so…Friends were a species of person in whose company one engaged in absurd, even grotesque, activities…To have friends was a sign of degeneracy…I was a pathfinder. Mine was a solitary combat.”

Of course, even a six or seven-year-old knows what is real and what is pretend, so Nothomb is taking this perspective to extreme lengths. The illusion is slightly punctured by the object of her affection, Elena, who refuses to refer to the bike as a horse and is uninterested in the grand war in which young Amélie has crowned herself as general.

Even once reality is revealed, the children’s war game is still brutal. They fight, torture and taunt one another. They are bullies in extremis, but they are also all complicit in keeping the war alive. They hide weapons and injuries from the adults. Between Nothomb’s frank writing style and the lack of filter when children are young, it feels like a basic truth about humanity is revealed: some people need an enemy, they can only thrive in battle, and will therefore create/prolong that battle with all their might.

I know that Nothomb’s brand of auto fiction isn’t for everyone. But for me it works so well. Nothomb’s unusual childhood deserves a storytelling style that reflects its weirdness. Nothomb really highlights the humour in the way children can take themselves so seriously (and fail to see what is serious in their parents’ lives). And I find her thoroughly entertaining.