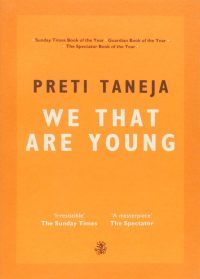 We That Are Young
by Preti Taneja

I figured that while we were in lockdown, and I was back to a respectable reading speed, it was time to tackle one of the doorstop books on my TBR. There are a few of them. Generally I enjoy a big book as they have the room to really delve deep into characters and weave expansive plot. This novel ticked those boxes and much more. That said, it is now a month since I finished it, so I’m afraid this review will be far briefer than this epic saga deserves.

This is a retelling of King Lear set in modern-day Delhi. Devraj is the head of a megacompany and at the start of this tale he announces his retirement and intention to split the company between his three daughters. They all, in different ways, defy him. And he is growing senile, which makes him increasingly anti-women. It’s a brilliant, darkly fascinating interpretation of Shakespeare’s tragedy.

The story opens with Jivan, Devraj’s godson, returning to India after spending half his young life in America. He is attractive and well educated, and wants more than anything to reconnect with the family – especially his half-brother Jeet. But instead he is met by his estranged father Ranjit (Devraj’s right-hand man) and Devraj himself and swept away to the family estate, “the Farm”, where Jivan is told he now has a job in the company’s security department. This job comes with a creepy room from which he can monitor all the Farm’s CCTV and listen in on employee conversations – including the sisters’ lunchtime conversation.

Though distanced physically, emotionally and culturally from people he used to consider his own family, Jivan spends his first night in India discovering intimately how his semi-family have all changed. Gargi, the oldest daughter, now runs a significant portion of the company. She tolerates her husband and appears tired and lonely. Radha, the second daughter (and closest in age to Jivan) seems at first to have become frivolous – the company’s drug-taking, party-throwing head of PR. Youngest daughter Sita has just come back from university in England to do her part – i.e. marry a strategically useful man and take a senior job in the company.

Over the course of the evening Sita disappears, Jeet appears briefly to drop a bombshell, and we see signs of Devraj’s senility (the first hint that his later madness is not just a reaction to his daughters’ disobedience). If you’re familiar with King Lear, you will know the fates of the characters and many of their actions, but Taneja has added a modern twist to their motivations. The company is corrupt, old-fashioned and run with a totalitarian fist. Perhaps the daughters’ various ideas for revolution aren’t such a bad thing.

“We that believe in India shining – he whispers it into his shawl. We that believe we are better than all others. We that are the youngest, the fastest, the democracy, the economy, the future technology of the world, the global super power that is coming soon to a cinema near you, we, hum panch, that are the five cousins of the five great rivers…we that fight, we that love, we that are hungry, so, so hungry, we that are young! We that are jigging on the brink of ruin; we that are washed in the filth of corruption, chal, so what? Aise hi hota hai…We that sit picnicking on the edge of our crumbling civilisation…All of it is ours, we that are India and are no longer slaves: We that are young!”

The novel is divided into sections written from different characters’ perspectives, so for each portion we know one characters’ thoughts and feelings intimately, while everyone else is a mysterious actor. Brilliantly, the first character we get to know this well is the equivalent of Shakespeare’s Edmund – traditionally the villain of the piece but we are encouraged to empathise with him, to see how his precarious social position is used to manipulate him. Through these perspective shifts we soon see that nothing is clear cut.

The company owns several luxury hotels and is about to open one in Kashmir, so the company handover has come at a tense time. This provides Taneja with amazing landscape to describe, but also microcosms of class and society, against the wider picture of India and megacorporations. She goes into detail of the excesses of nightly parties thrown at one of the hotels. And then she reveals the extreme poverty of local people outside the hotel – from those few locals who work in the hotel, to those who pick through the waste produced by the hotel, there is a rigid system keeping hundreds of people in their place.

All of this detail would be simply an intellectual exercise, were it not so beautifully written. I was swept away. Each character I met wholly persuaded me they were the one to root for – except Devraj (which is interesting as I always root for Lear). As the conclusion loomed I was truly upset by the reminder that this is a tragedy.