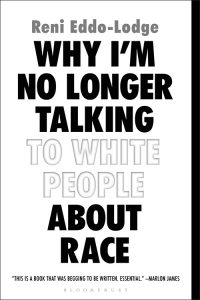 “In a world where blunt, obvious acts are just tip of the iceberg of racism, we need to describe the invisible monolith. Now, racism can be found in the way a debate is framed. Now, racism can be found in coded language. Attacking racist frame, form, functions and codes with no words to describe them can make you feel like you are the only one who sees the problem. We need to see racism as structural in order to see its insidiousness.”

I found it surprisingly tough to have it confirmed that campaigning spaces such as feminist groups and environmental groups have a history (and in many cases a present) of being hostile to black members. Eddo-Lodge is a feminist and spent years being attacked and/or ignored by prominent feminists (including some I would have previously said I respect and admire) for raising the point that black women experience misogyny and sexism in different ways from white women – and that feminist causes must acknowledge that or they fail to truly represent women. It appears to me now such an obvious statement that I am baffled by the pushback – but I wonder if me of 10 years ago would have felt the same.

“[Feminism] has failed when it works as an unwittingly exclusive movement that isn’t self-aware enough to recognise where its participants benefit from the current system…Demands for equality need to be as complicated as the inequalities they attempt to address. The question is: who do we want to be equal to? Men, like women, are not homogeneous…It’s clear that equality doesn’t quite cut it. Asking for a sliver of disproportional power is too polite a request. I don’t want to be included. Instead, I want to question who created the standard in the first place.”

Considering how awful so much of the reality is that Eddo-Lodge is bringing to light, she ends on a note of kindness and togetherness. She gives some pointers on how to be anti-racist and gently breaks it to white people that we need to sort this problem out.

This really is the perfect book for right now, so it’s little wonder it’s been selling out everywhere for the past few months. This should not be the entirety of your anti-racism education but it’s an excellent basis to build from.