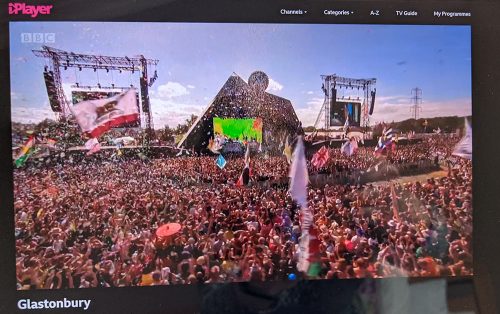 June sped by, didn’t it? And it’s been eventful. I made a good start on my anti-racism reading list, but I’m determined for this not to be a temporary detour from my usual reads. I’ve bought a fair few titles and added a lot more to my future reads list, so you should see them dotted into my reviews here. And more fool me that I haven’t previously covered these books.

I also watched the documentary I Am Not Your Negro, based on James Baldwin’s proposal for a book looking at his own life through the lens of the deaths of three of his friends: Medgar Evers, Malcolm X and Martin Luther King, Jr. Samuel L Jackson reads Baldwin’s unpublished words, cut together with footage of Baldwin speaking at universities, events and on TV. It’s a really impressive – though of course upsetting – piece that draws a clear line to today’s Black Lives Matter movement.

The last weekend of June would have been Glastonbury. This year rather than listening to new live sets from Worthy Farm on the radio, I watched many hours of old Glastonbury footage that the BBC made available on iPlayer. Inevitably, my favourites so far are Janelle Monáe’s 2011 set and the 2019 performance of Christine and the Queens. But I was also surprised to find myself spellbound by Dolly Parton. Who knew?

Why I’m No Longer Talking to White People About Race by Reni Eddo-Lodge
This book details the many ways in which racism exists in the UK that white people tend not to notice. From police bigotry to the language people use; from the largely erased history of black people in the UK to the systems and processes throughout our society that are racist, Eddo-Lodge lays it bare.

Superior: the Return of Race Science by Angela Saini
This was my second anti-racism read and it’s a very different perspective on the subject: how science is used to create, justify and perpetuate racism. Saini looks at the history of the concept of race, eugenics, and the deep pockets of white supremacists funding a slew of outlets for racism masquerading as science.

Why Do You Wear A Cheap Watch? by Hans Fallada
Translated from German by Michael Hofmann
This Penguin Mini collects three short stories that find a little humour in the struggles of ordinary people in inter-war Germany. In “War monument or urinal?” a small town wants to build a petrol station in its centre to encourage the new growth in motor traffic to stop there and spend money at its shops and cafes, but the townspeople can’t agree which existing building to tear down to create the space, with the debate in the town paper reaching ridiculous heights.

Natives: Race and Class in the Ruins of Empire by Akala
This book speaks directly to the current moment of anti-racism. Akala uses his own life story as a lens through which to discuss racism in the UK. He draws on the history of empire and slavery, migration and other political obsessions to look at how racism has changed over time and how it is experienced differently in the US. He highlights the way not just history but current events are funnelled to the UK public by our overwhelmingly white media and politicians to omit important black people’s stories. And it leaves us all worse off.

Circe by Madeline Miller
This is a gorgeous book, magical in every sense. It tells the story of Circe from Greek myth, the enchantress who pops up in Odyssey, Aeneid, Metamorphoses and other classic texts. The details about her vary, giving Miller room not only to link together all these disparate tales into one, but also licence to add her own spin. Why did she change men into animals? Miller’s explanation is convincing, as is her Circe.