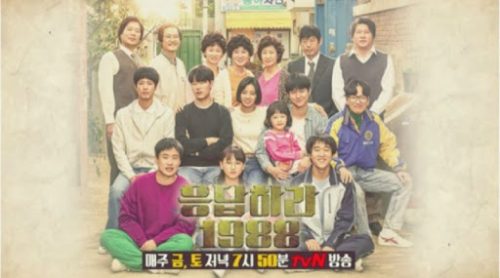 This is the third and, in my opinion, best instalment in the Reply series that began with 1994. In Reply 1988 (tvN 2015–2016) comedy and romance are still present, but take a back seat to the character establishment. The period setting is once again excellent.

Some of the Reply set-up remains the same every time. The main character, Sung Duk-seon, is a young woman with four close male friends – one of whom (we learn from flashforwards to the present day) she will end up marrying. Her parents are played by Sung Dong-il and Lee Il-hwa and, like in the previous series, these two characters share the actors’ names. The mother, Il-hwa, always cooks too much food.

Other than that, this series is rather different. The five families all live in one alley in the Seoul neighbourhood Ssangmun-dong. It’s working class, but even this tiny sample has its hierarchy of financial stability. 18-year-old Duk-seon (played by Lee Hye-ri) and her family are the worst off, thanks to her father making a series of poor financial decisions. They live in a half-basement flat (now a familiar term outside Korea thanks to Parasite) underneath the much larger and knick-knack-filled home of her schoolmate Kim Jung-hwan (Ryu Jun-yeol) and his family.

Jung-hwan is the stoic of the friend group, emotionally, but happily joins in the silliness that is usually started by Ryu Dong-ryong (Lee Dong-hwi). Dong-ryong is the son of his school’s headteacher and an executive mother, neither of whom ever have time for him. Tall, handsome Sung Sun-woo (Go Kyung-po, from Don’t Dare to Dream) is the class president, an academic over-achiever who seems more adult than his friends thanks to helping his widowed mother raise his much younger sister.

The last of the friends we meet is Choi Taek (Park Go-bum, from Love in the Moonlight), who left school early to pursue a successful career playing go. His early success and jet-setting means he has missed out on a lot of his friends’ experiences, leaving him comparatively naive and permanently exhausted. The whole neighbourhood shows its support and pride in him by treating him with kid gloves, but his friends know when to ignore their parents’ cautions and tease Taek.

Unlike the previous Reply series, the teenagers’ families are major characters too. Aside from Taek they all have siblings, and the siblings and parents have their own storylines about their careers, health, aspirations and romance. Major news events from 1988 and the following few years are woven in, such as huge university student protests. The show also incorporates lots of music and film references from the time (though on Netflix almost all album covers and film or TV clips are blurred out, which gets annoying quickly).

The real theme here is friendship. Most of the parents are very close, supporting each other in ways big and small – from lending a cup of rice to putting on a show of wealth for visiting in-laws. There are lots of communal meals, often with Duk-seon and her friends disappearing into one of the boys’ bedrooms together for a sleepover while the parents all get drunk in the living room. The friendships here feel real, based on shared history but also trust.

The show touches on serious subjects including poverty, prescription drug addiction, menopause and various serious illnesses. It depicts, though doesn’t criticise, the insane hours that students devote to studying in their last year of high school. They seem to be at school for 11-12 hours, then home for a quick dinner/change of clothes, then out to a study room until midnight or later – six days a week. I don’t know if that was a 1980s thing or if it still happens.

I really enjoyed this series. Despite the romance being demoted in importance, I was still gripped, and when the story suddenly accelerates for the last two episodes I was sad to be skipping over all the beautiful details.