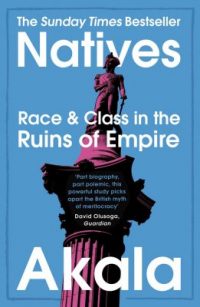 The personal moment that’s really stuck with me is Akala’s description of the relief he felt when he hit his late-20s and realised he had survived being a young black man – as in, he felt a palpable drop in the daily threat level to his life. That shook me.

“For the most part, unless you are involved with actual organised crime, the ‘gang’ bullshit and ends beef will subside past the age of 25; wisdom and the hard lessons of life combine to grow you up…you see that race and class conditioned your whole generation and that social mobility is largely a myth…Yes, you survived, but it is bittersweet; some of the best minds of your generation have been wasted, the children that grew up with the safety blankets of money and whiteness have gotten twice as far working half as hard…By 25…if you grew up both black and poor in the UK you know more about the inner workings of British society, about the dynamics of race, class and empire than a slew of PhDs ever will.”

At times this book feels like a series of short summaries of fascinating topics, so it’s a good thing there’s an extensive bibliography. Some of these topics were familiar to me – such as how racist stereotypes change over time to fit the “needs” of the elite, or how the history we are taught in Britain has huge omissions that affect race relations (e.g. the British Empire) – but some were new. I had no idea, for example, that Cuba played a huge role in the independence of South Africa and Zimbabwe.

I found Akala’s analysis of the differences in racial identities and racism in the UK vs the US vs elsewhere fascinating. He tracks how black communities in the UK are changing, due to changing patterns in migration, and how that affects everything from education to the UK music scene. He argues the case for pan-Africanism – recognising differences, acknowledging that not all black struggles are against a white majority (though most are rooted in colonialism).

Akala’s passion is education, and he has a lot to say about school systems in the UK, both from personal experience as an educator and from extensive reading. It seemed cruelly relevant, given how many exam grades this year are based on teacher assessments rather than actual exams, to read how much race remains a cause of bias in this kind of grading system.

“We know for certain that this trend of underestimating black children’s intelligence continues right throughout schooling…black children fall further behind the longer they stay in school. It is not complex: if a fair portion of your teachers…constantly assume you are way less clever than you actually are simply because you are black, and treat you accordingly, you are going to resent them and it will naturally affect your self-esteem and grades.”

One by one, Akala debunks racist statements that are sadly all too common. For example: why it’s not a positive thing that most prominent black Britons are musicians or athletes. Why you can’t defend the transatlantic slave trade by arguing that Africans sold those slaves to the Europeans. And why statues of white supremacists should be taken down.

The personal perspective is important, because that’s how humans learn best – from individual stories. But it puts a huge onus on people who have lived through terrible things to relive them so that the more privileged among us can be educated. So I am hugely grateful to people like Akala for putting their stories out there.