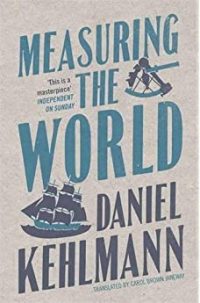 “The curve of the earth in the distance…The people staring upward, tiny faces in a ring….Gauss clung to the rim of the basket and it was when he closed his mouth he realised he had been screaming…How fiercely the air was shaking them! And the sun – why was it so much brighter up here…And space itself: a straight line from every point to every other point…Points making lines, lines making planes, planes making bodies.”

For Humboldt, measurement was a true joy, one he loved so much he undertook a series of grand expeditions on behalf of whichever European monarch or government would provide the funds. He collected ships full of botanical samples and delighted in meeting new people and putting himself through physical discomfort (or at least he delighted in the tales it enabled him to tell afterward).

Humboldt’s story is the more exciting, adventurous one, but Kehlmann doesn’t omit the negative aspects of what he was doing: paving the way for colonial invasion/expansion in South America, for example. While Humboldt himself may not be guilty of more than boundless curiosity, he certainly knew what the information he provided could and would be used for.

“After some hours, Humboldt discovered that fleas had buried themselves in the skin of his toes. They had to interrupt their journey; Bonpland classified plants, Humboldt sat in a camp chair, his feet in a bucket of vinegar, and mapped the course of the river. Pules penetrans, the common sand flea. He would describe it, but nowhere in his diary was he going to mention that he himself had fallen victim to it…Humboldt said he’d thought a lot about the rules of fame. If it was known that a man had had fleas living underneath his toenails, nobody would take him seriously. No matter what his achievements had been.”

Gauss’s, meanwhile, is the sadder individual tale. A gifted mathematician who struggled to connect to other people, he found true love but spent his life fighting illness and lack of money, resulting in his often being away from his wife and home.

So this novel moves between comedy and tragedy, tending towards a melancholic humour that made it a tougher book to finish than it was to start out with. I’d still recommend it.

Source: I bought this at Kohlhaas bookshop in Berlin in 2016.