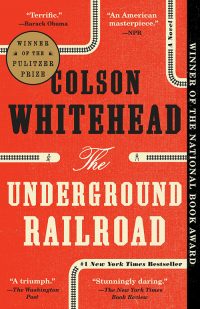 “Sometimes a slave will be lost in a brief eddy of liberation. In the sway of a sudden reverie among the furrows or while untangling the mysteries of an early-morning dream. In the middle of a song on a warm Sunday night. Then it comes, always – the overseer’s cry, the call to work, the shadow of the master, the reminder that she is only a human being for a tiny moment across the eternity of her servitude.”

Whitehead brilliantly evokes every setting – the slave village on the plantation, the platforms at each stop of the railroad, the towns and remote farms Cora passes through – and how Cora is changed by each place. Some people and places give her hope, others tear it away.

One of the quotes on the cover of my copy is “wildly inventive”. While Whitehead has obviously used a certain degree of invention, what is wild is that the truth hasn’t been stretched all that far. A little imagination gives the historical truth a grotesque quality, the very real horrors seen through the lens of the horror genre.

“Much of what they said could apply to any former slave who overheard them. A plantation was a plantation; one might think one’s misfortunes distinct, but the true horror lay in their universality. In any event, the music would soon cover their talk of the underground railroad. Cora hoped the musicians wouldn’t think them rude for their inattention. It was unlikely. Playing their music as freemen and not chattel was probably still a cherished novelty. To attack the melody without the burden of providing one of the sole comforts of their slave village. To practice their art with liberty and joy.”

Something I learned from this novel, because of the way it is emphasised by Whitehead, is the difference between states in the way slaves and former slaves were treated. I found myself googling a lot of the details to find out what was true and what was invented. I also realised for the first time that the flight of escaped slaves being chased by slave catchers shares a lot in common with the many Holocaust narratives I have read – hiding in tiny spaces, false names and papers, trying to pass as other people with other backgrounds. I clearly need to read some historical slave narratives.