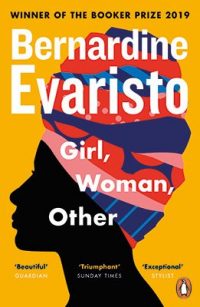 “Amma misses her daughter now she’s away at university

not the spiteful snake that slithers out of her tongue to hurt her mother, because in Yazz’s world young people are the only ones with feelings

but she misses the Yazz who stomps about the place

who rushes in as if a hurricane’s just blown her into a room – where’s my bag/phone/bus pass/books/ticket/head?

…the house breathes differently when Yazz isn’t there

waiting for her to return and create some noise and chaos

she hopes she comes back home after university

most of them do these days, don’t they?”

Most of the narrators are gay black women, and some of the details of their lives are defined by their race, gender or sexuality, but they are all complex individuals and quickly established as such. In fact, my only criticism of this book is that in some chapters I fell completely in love with the narrator and was sad at the end of the chapter that I wouldn’t hear from that voice again.

In some cases, the switching narrators mean we get to read about the same events from multiple perspectives and this is handled well (I’ve seen it horribly over-egged in other books). But just as often, the point being made is that those “minor characters” in our lives actually do have their own full lives. Evaristo manages to bring to life in relatively few words not only her 12 narrators but every minor character too.

“he joined the police when he left school, had been bullied by his brothers when he was growing up because he was a soft lad

you don’t know where you stand with Alan

not felt the same about him since”

This book achieved that old cliché of making me both laugh and cry. It also references a lot of other writers, significantly expanding my to-read-list (because I always think if I like a writer, I will probably like the works they reference). I loved this novel so much I immediately added three more Evaristo novels to my wishlist too.