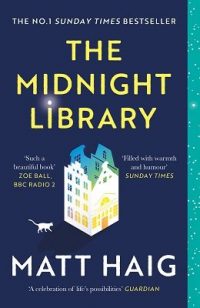 The Midnight Library
by Matt Haig

This novel was selected by my work book club, and it was a classic example of my having loved a book until I started to talk about it with other people, at which point I found many flaws. I love Matt Haig and his style is very readable, so I think I probably did notice some of this book’s problems while I read, but skimmed over them. And I would still recommend this book, just with a little commentary about my reservations.

The problems begin with the premise itself. Nora is having a terrible day and as midnight approaches, she attempts suicide. But instead of leading her to death or a hospital bed, she finds herself in a magical library where every book represents a version of her life. The librarian tells her that she can try on these variants of her life to see if any of them fits her better than the life she just tried to leave. If she isn’t happy there, she will return to the library.

The librarian explains that these lives are based on decisions that Nora made, so she can’t choose a life where someone else’s decision was different, only those where she opted for something else. To help guide her choices, Nora is given a book of regrets. She has many regrets, but if she can undo all those decisions will it make her life a happier one?

It’s simplistic, heavy-handed and very obvious where it’s leading but while reading it I was utterly captivated. I wanted the best for Nora and if that meant her learning some obvious lessons, so be it. I like the variety of career options that she explores – including scientist, professional swimmer and winemaker – and the fact that romance is one factor in her life, not the only thing that matters. And I really like Haig’s turn of phrase.

“She closed her eyes. She remembered the chlorine-scented disappointment of finishing second. ‘It was a lot of pressure.’

She didn’t correct his knowledge of diamonds. She didn’t tell him that while coal and diamonds are both carbon, coal is too impure to be able, under any pressure, to become a diamond. According to science, you start off as coal and you end up as coal. Maybe that was the real life lesson.”

I did find it curious though that the message about depression is so mangled. Haig is very public about having depression and his own near suicide 20 years ago. So why write a novel in which the main character claims her depressive feelings are situational and we never see her confront the fact that actually she is depressed in all her lives, no matter what situation she finds herself in? Why place so much emphasis on letting go of regrets, as if that in itself is a cure for depression? And why does she leave lives as soon as she experiences a moment of unhappiness, as if it is ever possible for a life to be 100% happy all the time? For a book centred on a suicide attempt, where death is much spoken of, there is a strange avoidance of discussing depression and suicidal feelings.

On a rather less serious note, I would also quibble that if you’re going to make a point about how success does not equal happiness, it would help to show the character experience different degrees of success rather than being brilliantly capable at everything except in her core life. Wouldn’t it in fact help her to know that despite what people keep telling her, she in fact never could have made the right series of choices to become an Olympic medallist, that it isn’t her fault? And maybe not every book needs oversimplified quantum physics as a metaphor.

“Human brains take complex information about the world and simplify it, so that when a human looks at a tree it translates the intricately complex mass of leaves and branches into this thing called ‘tree’. To be human was to continually dumb things down into an understandable story that keeps things simple…Humans are fundamentally limited, generalising creatures, living on auto-pilot, who straighten out curved streets in their minds, which explains why they get lost all the time.”

It’s a small book and, as the blurb on the back says, it’s a fable. It’s warm-hearted and cheerful but with some sad bits. And I still love Matt Haig’s writing style.