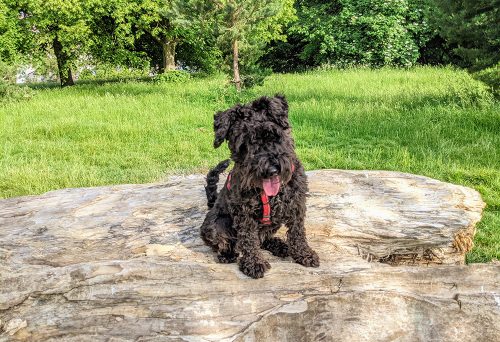 We had a mini heatwave this month, but it’s mostly been just right for a sun-avoider like me. We’re starting to take Beckett on some longer walks and train journeys, preparing for our holiday later this summer. She’s also started obedience classes, mostly to learn to follow instructions when there are other dogs around. Other dogs are so very exciting.

This month’s reading, not hugely unusually for me, has been distinctly feminist and/or queer. Every single book has been great, as is the one I’m still in the middle of: Fire, the third volume of Anais Nin’s diaries. It’s a big oversized hardback, so I’ll be dipping in and out of it for a while to come.

I had a big sort-out of my books last week and weeded out a bunch from my TBR that had been there for too long and just didn’t excite me. The charity box is getting heavy. And besides gaining a little shelf space, it had the added benefit of reminding me about lots of titles on my TBR that I am excited about, hence picking up Fire several years after buying it.

Looking at my diary notes, this has been a disappointing month for films. But I have watched some great TV: Gentleman Jack, series 2 of Pose, series 3 of Detectorists. Apparently I’m all about BBC iPlayer right now!

The Manningtree Witches by A K Blakemore
A fictionalized account of a real-life witch hunt in Manningtree, Essex, in 1643, told from the perspective of Rebecca West – one of the women who were tried by Witchfinder General Matthew Hopkins. Despite being published this year (look at me reading a current book!) it’s written in a style that evokes the historical setting, which means I found it a bit mannered and stilted. I have read very little set in the English Civil War and even less about witch hunts in England, so I learned a lot from this and I’d definitely like to know more about the history. I liked how Blakemore shows the various reasons women might be accused of witchcraft – mostly because they were capable of living alone without men, it seems – but I must admit that the style kept me at a distance, so that I was never really absorbed in the story.

The Fire Never Goes Out: a Memoir in Pictures by Noelle Stevenson
Stevenson is the comic artist and writer behind such titles as Lumberjanes, as well as being the showrunner for the excellent cartoon series She-ra and the Princesses of Power. So I was already a fan but I knew nothing about her beyond the work. This memoir largely comes from Stevenson’s website, on which for several years she published end-of-year summaries that combine art, photos and text to give a remarkably open, honest account of her life. Dealing with self-doubt, depression and discovering her sexuality while very quickly going from starting art school to achieving huge career success, Stevenson came dangerously close to burnout multiple times. She takes her readers through it all with humour and increasing self-awareness.

Invisible Women: Exposing Data Bias in a World Designed for Men by Caroline Criado Perez
The title kinda says it all. This is a really good non-fiction title to arm yourself with the facts and retorts you need next time someone claims that women have equality already. But be warned: every page will make you angry. Or at least, it should. Because women continue to be systematically excluded from consideration in everything from town planning (where everything is structured around the daily movements of the average man) to medical trials (where women’s bodies are deemed too complicated). On the plus side, it gave me some good ideas about how to plan my next metropolis in Cities Skylines.

The Bricks That Built the Houses by Kae Tempest
God, Tempest is so talented. Everything they create is brilliant: music, poetry, rap and now novels. This novel takes characters Tempest created in their solo album Everybody Down and their epic poem Brand New Ancients, and gives them a full story. Storytelling and character creation have always been Tempest’s strengths so I knew this would be great and I was right. In the opening chapter young Londoners Becky, Harry and Leon are escaping the city with a suitcase full of stolen money. The narrative takes us back to when they all met each other and how that situation came about. It’s gripping, entertaining and feels truly authentic about young people in London.

Under the Udala Trees by Chinelo Okparanta
This novel opens during Nigeria’s civil war. Ijeoma, aged 11, is sent away to work as a housemaid far from the fighting and ends up staying long after peace arrives. While there she meets another displaced child and they fall in love. They are from different ethnic communities. They are also both girls. She learns that she must hide her sexuality but as she gets older, repressing her true self only gets harder. This sounds like a tough read but was much more enjoyable than might be expected from that summary.