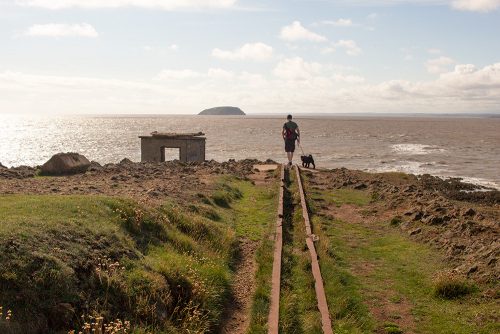 I am currently in the middle of three different books and I’m on holiday next week so hopefully next month’s “books read” list will be much longer. We’ll see.

This month we went from heatwave to weeks of rain storms, so outings have been sporadic. We ended the month with a trip to Brean Down in Somerset, which was a fantastic afternoon out. And Beckett graduated from doggy obedience classes, so she is now officially a Good Dog.

My top films this month were Black Widow and The Dead Don’t Die, which are both very entertaining. I also watched the first season of Rita, a Danish comedy about a school teacher who initially appears to not care about anything or what anyone else thinks, but it gradually becomes clear that this is a facade. It’s wryly funny and has been left in a very interesting place for season 2.

Orlando by Virginia Woolf
I first read this 7 years ago and reread it for my work book club. I think I liked it less the second time around. I like the adventure, the sense of humour, the commentary on gender and the weirdness of the timeline. I don’t like the racism, or the uneven pace of the narrative. I still love Woolf’s language and marked more than a dozen great quotes.

The Proof by César Aira
This slim novella manages to be both thoughtfully philosophical and explosive with action – it just does one then the other. There is a sense of menace from the start, when 16-year-old schoolgirl Marcia is out for a walk in Buenos Aires. She meets two young punk girls and, repelled but fascinated, strikes up conversation with them. I don’t know if it was the original or the translation, but I found some of the painstaking description a little tedious.

Clara’s Daughter by Meike Ziervogel
Another novella, this time about a mother and daughter. Michele has a tough, demanding job and she has a great retirement home lined up for her mother. But Clara really doesn’t want to leave her house. Honestly I was not gripped by this story, despite some unexpected twists and turns.

Saga volume 9 by Brian K Vaughan and Fiona Staples
This is a really eventful and honestly upsetting instalment in the ongoing space opera that is Saga. From the start this series has included explicit sex and explicit violence but the comedy, emotional depth and complex characters make it more nuanced than might be expected.

It’s Not About the Burqa edited by Miriam Khan
This is a series of essays about being a Muslim woman in the west, written by Muslim women in the west (mostly UK). They’re both personal and general, serious and funny, angry and hopeful. I learned a few things and discovered some great writers from this collection.