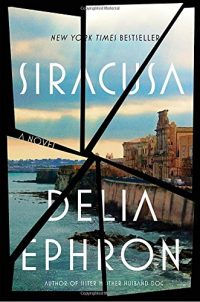 I never used to care about liking the characters in the books I read, but I must admit that I spent the first quarter or so of this novel wondering if it was worth persevering with four irritatingly self-involved narrators. I’m glad I did, because I enjoyed it overall.

I’m pretty sure the self-absorption of the four main characters is the point, and the extremity of their smug egotism is by turns funny and tragic. They all narrate the same events from their different viewpoints – which if they were less self-absorbed would mean they actually noticed the same things at least some of time, rather than these wildly different accounts.

The story is simple: a small group of Americans travelling abroad don’t get on very well. Two married couples, Michael and Lizzie, and Finn and Taylor – plus Finn and Taylor’s 10-year-old daughter Snow – travel to Rome and then Siracusa in Sicily for a week’s holiday together. Lizzie and Finn are old friends – former lovers, in fact – but otherwise the group aren’t close at all. The holiday was suggested on a whim while having dinner together, the kind of suggestion that usually wouldn’t be followed up on by mere acquaintances.

It’s made clear from the start that something bad happened on this holiday. The four adults are looking back from a future point, trying to identify where it began to go wrong. They have of course brought more baggage with them to the trip than suitcases of clothes. There are infidelities, but also their attitudes to each other, which are painfully out of sync.

“Why do most of us want marriage? Crave it for status or stability that is an illusion. Marriage can’t protect you from heartbreak or the random cruelties and unfairnesses life deals out. It’s as if we’re chicks pecking our way out of our shells, growing into big birds splendid with feathers, and then piece by piece, we put the shells back together, reencasing ourselves…Deluded of course. Shells crack easily.”

I like the thriller atmosphere that this is imbued with, and the way that details hinted at in one narrative are either revealed later or are interpreted completely differently. There is no absolute truth, but the narrators’ voices are distinct enough that I suspect most readers will – consciously or unconsciously – choose the one they believe to be closest to “how it really happened”.

I also like the way that Snow is so mysterious – a cypher for the adults’ insecurities, often humorously different from one narrator to the next. Taylor is an extreme case of attachment parenting, always speaking on her daughter’s behalf and apparently convinced that Snow is as innocent and perfect as her name implies. Finn, however, sees mischief and drama in his daughter’s quiet demeanour, while Lizzie sees a would-be temptress. Michael – a famous writer – sees in her an adoring fan, though it is in fact Taylor who’s besotted with his fame.

I did, though, struggle to care that these people were all lying to each other, or at least completely misunderstanding one another, because they’re all awful. I was also thrown by the way that they all at times directly address the reader in a manner that felt very artificial. Michael’s chapters, in addition, have an odd tendency to drift in and out of a mannered third-person account that I think is meant to be him mining the material for a novel he’s working on. Or perhaps it’s meant to show how he isn’t really connected to reality, but always lives as if he is in a story he’s writing – which is an accusation Lizzie makes more than once.

Another gripe that I have – and I freely acknowledge this a personal one that others probably won’t share – is that it takes half the book for the group to reach Siracusa and they all hate it. The problem here is that I went to Siracusa a few years ago and loved it. For me, Siracusa – or at least Ortigia, the little island of “old town” where all tourists stay in the city – is one of the most beautiful, wonderful places I have ever been. I spent a magical week there and that was a large part of why I wanted to read this book. Some of the things these characters say about Siracusa actually made me angry, which I know is silly, and also of course their feelings about this holiday are coloured by the events that took place there.

“Siracusa? I hated it instantly. Strode off, got lost, doubled back, had to make sense of a fucking map.

Siracusa. Already destabilized, I was further unmoored by the chaos of its narrow streets. A place that refused to adapt to its conquerors, whose ancient footprint still ruled, wasn’t going to bend to my will.”

Either way, I spent a lot of the last week dreaming of going to Sicily again. One day.