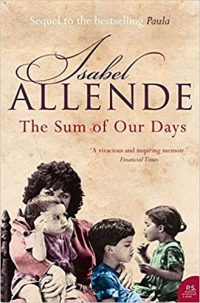 This is the third volume of memoir that Allende wrote, which is perhaps an odd place to jump into someone’s life. When I bought this I was attracted purely by her name, after having read and loved House of the Spirits. But it was made extra odd by the circumstances in which this book was written. Allende’s daughter Paula died in 1992. The following year she published her second memoir Paula, mostly written while Paula lay in a coma that they knew she probably wouldn’t wake up from. She started writing this third memoir after Paula’s death and addresses it directly to her daughter, updating her on the extended family as if she had moved away rather than died.

Allende talks candidly about her writing process, her relationships, her hopes and fears, along with all the details of her life. And Allende’s life is surprisingly eventful. Admittedly, this book covers 13 years but the big stuff all happens in the first couple of years following Paula’s death.

“The years slip by, stealthily, on tiptoes; they whisper behind our back, making fun of us, then suddenly one day they frighten us when we look in the mirror, they drop us to our knees or drive a dagger into our backs. Old age attacks us every day.”

Allende is living in California with her second husband Willie. Their children (from previous marriages) are all fully grown but Allende dearly wants them all to live nearby, to be one big clan. Her son is in New York, Willie’s daughter is missing (the first big event in their lives after Paula’s death) and Allende is not on great terms with his sons. So instead she adopts friends into the clan, offering a home and/or a job in her own office to any friend in a tight spot.

That side of Allende I found incredibly endearing. And unusually I wasn’t irritated by her spiritual habits and magical thinking; if anything I appreciated discovering that that side of her fiction is rooted in her genuine way of looking at the world, heavily influenced by her feminism. However, I was a bit put off by the way she refers to Willie’s children, who she does not often say kind things about.

“Here in this world you left behind, men have kidnapped God. They have created absurd religions that have survived for centuries – I can’t understand how – and continue to grow. They are implacable; they preach love, justice and charity, and commit atrocities to impose their tenets. The illustrious gentlemen who propagate these religions judge, punish and frown at happiness, pleasure, curiosity and imagination. Many women of my generation have had to invent a spirituality that fits us, and if you had lived longer, maybe you would have done the same, for the patriarchal gods are definitely not suitable for us: they make us pay for the temptations and sins of men.”

There were two things that really touched me in this book. The first is Allende’s fight to find suitable parents for Willie’s baby granddaughter when his daughter can’t raise her. She initially wants to adopt the girl herself, but everyone from lawyers to friends to family tells her she cannot take on a seriously ill baby in her 50s, especially not when the grief of losing her daughter is so fresh. The second is her decision to start a foundation in Paula’s name supporting women’s education around the world.

Overall, I really enjoyed this. It made me want to read everything else by her – fiction and non-fiction, even her strange-sounding book Aphrodite about the relationship between food and sex. Maybe especially that one.

This translation published 2008 by HarperCollins.