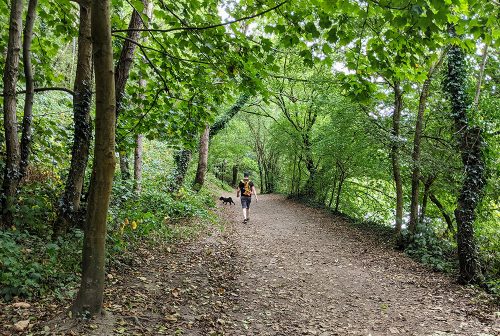 This has been a good month. The weather’s been beautiful, I read a lot, and today I got my third COVID shot so I am safer for the winter months to come.

My favourite read this month was The Street by Ann Petry, which was a staff recommendation at Stanford’s bookshop in Bristol. This is one of the many reasons why bookshops rule.

As always I’ve watched lots of films this month – including both Kate and Beckett, which are recently released thrillers on Netflix. Kate is the better film, starring Mary Elizabeth Winstead as an assassin in Tokyo. We’re hoping they release a thriller called Tim soon! I also really enjoyed Sylvie’s Love (a 1960s-set romance starring Tessa Thompson) and Sound of Metal (Riz Ahmed as a drummer who loses his hearing).

And having learned from our holiday in August that Beckett is up to walking for a couple of hours now that she’s all grown up, we’ve done a few longer walks lately. It’s nice to explore a little further afield and not just go to our three local parks every day. Though with winter weather and shorter hours of daylight coming soon, we might not have that choice for long. For now we’ll enjoy the autumn colours.

The Sum of Our Days by Isabel Allende
This is Allende’s third volume of memoir, covering the years 1993 to 2006. It covers her grief following the death of her daughter Paula, through figuring whether she and her husband should adopt his parent-less granddaughter, to her research into sensuality and starting a charity to fund women’s education around the world. It was a busy time in her life. I really like Allende’s approach to love and life, her feminism.

The Street by Ann Petry
Lutie Johnson is a young black woman trying to raise her son alone in 1940s Harlem after separating from her husband, who cheated on her. She moves into a tiny top floor apartment that’s dark, grubby and too hot all summer, with a super who openly lusts after her. Lutie is desperate to save up enough to move somewhere that’s safer for her and has better prospects for her son. But rent sucks away a huge chunk of her wages and she fears they will never get out. This is a powerful book, with details that bring every moment to life.

Exquisite: the Poetry and Life of Gwendolyn Brooks by Suzanne Slade
This is a short children’s book about the first African American to win a Pulitzer Prize. I will admit I knew nothing about Gwendolyn Brooks before reading this. Clearly, I need to search out her work.

Bossypants by Tina Fey
This is a combination of memoir and reflections on life, in Fey’s familiar dryly humorous style. She’s clearly a smart, self-reflective person and I enjoyed her insights into being a woman in comedy, as well as snippets about the famous people she’s worked with and/or friends with.

Territory of Light by Yuko Tsushima
This novella follows a woman’s first year of living alone with her young daughter after separating from her husband, who cheated on her (yes, it has a lot in common with The Street but is also completely different). Each chapter is a new month, with new details about the light in their apartment and the challenges of parenting and divorce. Despite its brevity, this book includes both action and contemplation.

Piers of the Homeless Night by Jack Kerouac
This is two essays by Kerouac about travel in the US. In the first he recounts waiting at the docks for a friend who has promised him a job on a ship to Japan. He’s desperate to travel and his disappointment is palpable as it becomes clear he’s not getting on that ship. The second essay is more of a general musing on the role of the “hobo” in American society. He has interesting things to say, but his meandering style does make it hard to follow.

Modesty Blaise by Peter O’Donnell
Published in 1965, this is the first of the 11 novels that O’Donnell wrote about the character he had created for his comic strip two years earlier. And it’s really fun. Here, he tells the story of how Modesty, formerly the head of an international criminal organisation, came to work for the British secret service. It’s a thrilling chase to foil a diamond heist before it happens. Modesty is a great character, and I will definitely be seeking out more of these novels.