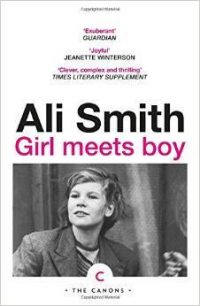 This is such a lovely book. Using that word, I fear undersells or even undermines it, but it’s precisely how I feel about it.

Sisters Anthea and Imogen live together in what was their grandparents’ home in Inverness. Their relationship is strained, fractious, as they see the world very differently. Imogen enjoys her job in marketing at Pure, a large corporation that is looking to bottle and sell the local water. She even got Anthea a job there too, but Anthea is less keen. Corporate isn’t really her.

Through the sisters, their lives and love lives, Smith explores Ovid’s Metamorphoses in a modern setting, in particular the story of Iphis and Ianthe. It isn’t hidden away in the subtext; one character explains this story to another, but Smith makes that feel entirely natural. (There are also Shakespeare references that are a little more hidden, but I don’t think the reader who doesn’t spot them will miss anything. No doubt there are allusions I didn’t see too.)

As the book’s title and the myth of choice suggest, this is a book that explores fluidity of sexuality and gender. It’s done beautifully, poetically, but not without acknowledging some of the harsher reality. When one of the leads discovers her sister is in a same-sex relationship, she muses on all the labels she has heard gay people called, including some horrific, offensive ones.

“The grey area, I’d discovered, had been misnamed: really the grey area was a whole other spectrum of colours new to the eye. She had the swagger of a girl. She blushed like a boy. She had a girl’s toughness. She had a boy’s gentleness…She was so boyish it was girlish, so girlish it was boyish, she made me want to rove the world writing our names on every tree.”

The book opens with a flashback to the sisters’ childhood, with the line “Let me tell me about when I was a girl, our grandfather says.” He proceeds to do just that. It’s neither a joke, nor literal, just a story. One sister loves this, the other vehemently protests.

Gender isn’t the only transformation explored. In this short novel both sisters are given room and reason to grow, learn and improve themselves. They find common ground and accept their differences. Feminism is a major theme, and with it casual sexism, the insidious kind that many people brush aside but builds layer upon layer until it gets hard to ignore.

There is so much depth to this short, sweet story. I clearly need to read more Ali Smith!