I now own a small collection of books written by or about Anne Frank.

Yes, that’s two copies of The Diary of a Young Girl. The big hardback was a new translation from 1995 and this is the copy I read when I was 18 (I think I had previously borrowed the earlier translation from the library when I was 13 or so). It deeply affected me, as I think it affects everyone who reads it, so the one thing I was sure of when we planned our holiday to Amsterdam was that I was going to Anne Frank House and I was going to stand in the Secret Annexe.

The second of these books that came into my possession is The Last Seven Months of Anne Frank, which my dear friend H bought for me at (where else?) Anne Frank House when she holidayed there last year. Because she knows me well, she knew I’d already own the diary.

But that didn’t stop me from wanting the newer version of the diary, released in 2001, with previously unpublished material. And of course when I saw that they have now separately published Anne Frank’s short stories in the collection Tales From the Secret Annexe I had to buy that.

It was a really strange experience going to that museum at 263 Prinsengracht, Amsterdam. You walk into a modern building added to the side of Otto Frank’s business premises, and are fed through some background info before the warehouse, then the offices, then the secret annexe, then back down to further info about the terrible fates of the annexe occupants and finally the diary itself.

Despite being crowded and hustled through it all, despite the historical rooms being empty but for photos and other documents on the walls, I found it profoundly moving. For one thing, though I had read about the exact dimensions of the annexe, it was still shocking to experience its smallness for myself. It was strange seeing the pencil marks still on the wall recording the heights of Anne and her sister Margot. And that bookcase-covered secret door, which I’d read about and even seen photos of, but to see the original was the oddest thing.

But most of all, it was the pictures still on the wall in what had been Anne’s bedroom – postcards and magazine pages showing historical figures, famous paintings, film stars, the English royal family. Most of her pictures had been removed but there are still a few dozen there, preserved behind perspex. And though it’s been years since I last read the diary, I could remember Anne writing about those pictures on her wall and how much they meant to her.

So in the next few months, with that experience fresh in my mind, I’m going to read my three new books by or about Anne Frank. It will have its depressing moments but I remember the great thing about the diary being that it’s not (for the most part) a depressing read of itself. The sadness comes when you turn the page from her last written words and read the publisher’s note about her tragic death. It’s powerful, even when you know the facts already. 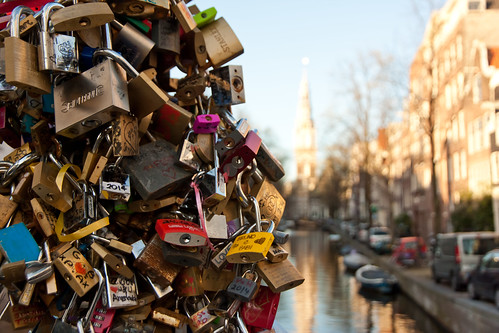 I have neglected the blog this month and my excuses are slim. But in my defence this past week I was having too much fun in the land of canals and bicycles. From our first hour in Amsterdam, the city had won my heart (it helps that we arrived in glorious sunshine, which was sadly not continually present for our whole trip). It has a great atmosphere, good food, very few cars and, in the parts we saw at least, feels very well looked after.

I’ve barely started the process of going through my photos so more will follow, but for now I will leave you with this note I made during our first afternoon in the city.

Amsterdam: guy clutching an Orhan Pamuk paperback while cycling ahead of a Spliff smoking accessories van.