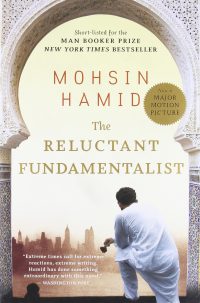 The Reluctant Fundamentalist
by Mohsin Hamid

This was the first book I read for my Easter weekend readathon and it was an excellent start. It’s gripping, beautifully written and warmly inviting. In fact literally so, as it directly addresses a second person – a listener to the tale, inviting you right into the heart of the story.

The setting is Lahore, a cafe in one of the city’s squares, where a local man, Changez (the narrator) has approached an American visitor and offered to act as his guide. Over tea and then dinner, Changez tells his story – one that is surprising and seems to be building up to something.

We learn that Changez spent a few years living in the USA, thanks to an Ivy League scholarship and an excellent job on the back of that. But then everything changed – in his words, the city he loved (New York) and the woman he loved there both betrayed him, though it becomes clear that the reality is more complicated.

END_OF_DOCUMENT_TOKEN_TO_BE_REPLACED This collection was recommended – and indeed loaned – to me by a friend after a conversation about classic books in India versus in the UK. Many of the names were the same for both of us, but one literary giant I hadn’t heard of, much less read, was Saadat Hasan Manto. So we had to fix that, obviously.

Manto wrote in almost every medium but the short story is what he was known for, and this selection, specially translated (though apparently most of Manto’s work has been translated into English before at some point) attempts to provide a representation of his whole career, including stories considered classics, such as “The new constitution”.

When telling people what I am reading I have stumbled over such basic information as his nationality, or country of birth, because the answer to those questions is a bit tricksy. He was born to a Kashmiri family in Amritsar in British-ruled India, later living mostly in Lahore, Bombay and finally Karachi. He died less than a decade after the Partition of 1947, and is quoted in the introduction to this volume as saying that he truly did know whether India or Pakistan was his true homeland.

And that, with the turbulence of those years and tensions between religions and social groups, is central to many of the stories in this collection. Which is a great insight and can be very moving. However, in all I’d say I had a mixed reaction to these stories. The language is often beautiful, not flowery and easy to read – except occasionally for the subject matter. The stories are often erotic, with lots of describing women’s bodies, and they don’t shy away from getting down and dirty at times. This is particularly true because many of the women characters are prostitutes.

And I think this is where I began to have a small problem. Where the male characters are varied, three-dimensional and cover a wide strata of careers, the depiction of women is a little…misogynist. Women are always described physically in detail and tend to be defined by their social position or religion rather than having a clear character.

“Tears flickering over her thick eyelashes will look lovely. It will be like raindrops dancing down a shuttered window. It is possible that you may not think tears to be necessary in women’s eyes, but I cannot even imagine a woman’s eyes without tears. Tears are the perspiration of the eyes. A worker’s brow is only a worker’s brow when it is shining with perspiration. A woman’s eyes can only be a woman’s eyes when they are drowned in tears.”

But that reservation aside, these are good stories. They’re real, sometimes shockingly real. There was one story, “The return”, that left me stunned. In fact, for that one story alone I would rate Manto very highly. I also really liked the (very different) story “Odour”, which is sensuous and strangely touching.