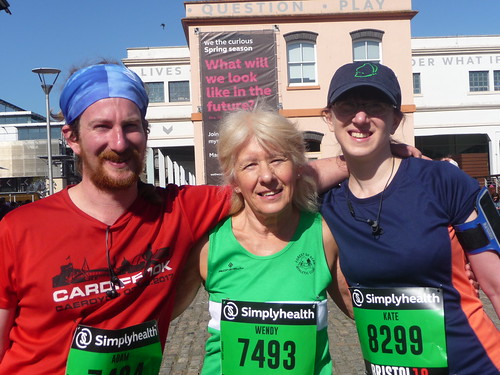 Once again this year, my Mum talked me into running the Bristol 10k, so I have been training since mid-January. It did not go smoothly. There was snow and ice, injury, busy periods at work tiring me out and then before I knew it my old enemy reared its head: summer.

There is a good reason that May is Lupus Awareness Month in the USA. These long hours of daylight and higher UV levels can come as a surprise, especially on cloudy or wet days. I always have a lupus flare-up in May. Which made me wary of the Bristol 10k’s date of 13 May.

END_OF_DOCUMENT_TOKEN_TO_BE_REPLACED

As I may have mentioned several times already, I will be running the Bristol 10k on 7 May, which is approaching fast. I’m running to raise money for Lupus UK, hence the pose above.

END_OF_DOCUMENT_TOKEN_TO_BE_REPLACED

Happy Leap Day! Despite the extra bonus day, I haven’t read as much as I’d have liked to this month. That’s not because I’ve had less free time but because I’ve picked back up on multiple hobbies that I’d let slide over winter. I’m writing and knitting, but the biggest time suck is that I’ve started running.

I’m using the good old Zombies, Run! app created by author Naomi Alderman, which I’ve used for the past few years. But this time I’m working harder. I’m running three times a week, a fraction further each time, no excuses. I still intensely dislike running, but it doesn’t half make me feel better about myself afterward!

This month I also went to see the excellent play Pink Mist at the Bristol Old Vic, which is written entirely in verse. We’ve booked tickets to see a play every month until June. It’s our best plan ever!

END_OF_DOCUMENT_TOKEN_TO_BE_REPLACED

I come from an active family and I have a health condition that requires me to maintain my fitness so as not to fall to pieces, so it is with great regret that I admit that I am frankly pretty rubbish at doing exercise. I have good intentions but I don’t follow through with them.

Over the years I have tried many forms of exercise, from kick-boxing to trampolining to pilates to plain-old gym workouts. I quite like swimming but Bristol doesn’t have a central public pool and I’m rubbish at figuring out buses (I know it’s a poor excuse). Bizarrely the one thing I managed to keep up the longest (now lapsed) was the one I always maintained that I hated: running.

I don’t really consider running fun or pleasurable. It’s a free form of exercise that makes me feel like I’ve worked really hard because…well, I find it really hard.

My Mum said this to me back in 2009. She had talked me into entering a 5k race for charity (Lupus UK) and as she ran with me she alternately egged me on and chatted about anything and everything to take our minds off the painful physical effort. One thing she said that really resonated was that, because she runs a lot and has done for years, enters races, has run the London Marathon twice, people tend to assume that she finds running easy and fun. She does not. It has always been hard and she still finds it hard. That’s why she does it. You get a greater sense of achievement when you do something that you find really hard.

And I get that. When I get back from a run I really feel like I’ve pushed my body, done something that’s good for me. I’m proud of myself every time. That’s worth the pain and effort. On occasion. However, the occasions have got further and further apart so this year I signed up to a gym with a swimming pool and then bam! Along came a bold new idea: hulaerobics.

I’ve heard it said that when committing to a new exercise regime, one of the best motivators is to sign up to something with a friend or two. I can’t promise it works in the long run but it did get me to try out something I very much doubt I would have tried alone.

The ominous-sounding hulaerobics class is held at the Southville Centre. I don’t remember owning a hula hoop as a child so it wasn’t much of a surprise when, while waiting for the class to begin, my attempts to hula lasted approximately three seconds each.

Thankfully the class was aimed at beginners, which most of us were, and much of it was devoted to the simple task of learning to keep the hula hoop spinning (there was also some aerobics thrown in, if you hadn’t guessed that from the name). Apparently, by the end of the course we will be salsa dancing while hulaing. It feels a long way off but not impossible.

In one hour, as well as holding my abdomen tenser for longer than I have since I was a gymnast umpteen years ago, I learned to keep the hoop spinning (mostly) and do stuff with my arms at the same time. Result!

I had a lot of aches and pains afterward and I’m still tired today, so I’m not certain I’ll be going back next week, but I may yet be persuaded.