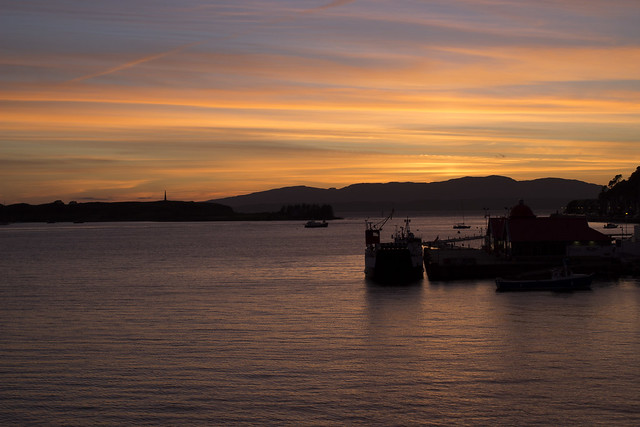 We spent the last week of June in Scotland, in the small town of Oban on the west coast. It was beautiful, and relaxing, and did I mention beautiful? Our hotel room looked out over the water and we watched some stunning sunsets from there. We went for walks, read our books, took thousands of photos (literally thousands) and enjoyed the fantastic scenery.

END_OF_DOCUMENT_TOKEN_TO_BE_REPLACED We’ve had a really lovely couple of weeks weather-wise and I’ve been trying my best to make the most of it, despite having that pesky work thing to go to. I’ve spent most lunchtimes outdoors and those bits of evening or weekend I’m not outdoors have found me sat near a window enjoying the long light hours.

Last weekend for a friend’s birthday we went to the seaside. We took the train to Weston-super-Mare, which for those who don’t know it is a properly cheesy seaside town. There’s a pier, fair rides, ice-cream stalls, donkey rides and about a zillion people crowded onto the beach. We ate fish and chips, built a sandcastle and admired the rather more impressive works in the annual Sand Sculpture Festival. It was a lot of fun. 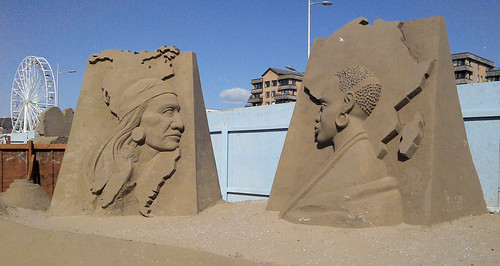 END_OF_DOCUMENT_TOKEN_TO_BE_REPLACED

I had heard quite mixed reviews of this novel but it was on the staff picks shelf at the very lovely Mr B’s Emporium of Reading Delights in Bath so I took a chance. I can see why it has divided people. As the blurb says, “it wears its darkness lightly”.

The set-up is that familiar one of the middle-class English family holidaying in a villa on the French Riviera when a stranger intrudes. Or is it? There are clues throughout that things are not what they seem and to the last page I was not sure if all or any of the events recounted had actually happened.

“He leaned his head out of the window and felt the cold mountain air sting his lips…They knew the past lived in rocks and trees and they knew desire made them awkward, mad, mysterious, messed up…He asked her again to please, please, please drive him safely home to his wife and daughter.
“‘Yes,’ she said. ‘Life is only worth living because we hope it will get better and we’ll all get home safely.'”

What it appears to be is the story of famous poet Joe Jacobs and his absent war correspondent wife Isabel, whose marriage is breaking down. But there’s also their teenage daughter Nina, childlike for her 14 years but trying to be one of the adults. And there’s family friends Laura and Mitchell, a couple who run a boutique shop in London and who never seem comfortable in this holiday setting. And then there’s Kitty Finch, the stranger who turns up floating naked in their outdoor swimming pool, unembarrassed by her nakedness or the apparent mix-up that has brought her there.

There are some plot threads that seem so inevitable that Levy has put their conclusions on the first page to save the reader wondering. Yes, we do have a philandering husband and a beautiful, strange young woman thrown in his path. Yes, we do have characters dealing with depression and thoughts of death. And if you take it all at face value then you might say that what happens is no more than the sum of these parts. But I think that the writing demands more of its reader.

There are two obfuscating themes: identity and fiction. Joe, we learn early on, is Jozef to his wife, JHJ to his readers. Everyone lies or withholds information or tells different versions of the truth. Not only is Joe a poet, but Kitty is an aspiring writer eager for his opinion of her work, and then later in a section told from Nina’s perspective there are short poems thrown into the narrative as if she, too, is a poet, an inventor of fictions. Characters seem to repeat each other’s words or actions as if the novel is being rewritten even as you read it.

“No one dared say they minded, because the war correspondent was controlling them all. Like she had the final word or was daring them to contradict her. The truth was her husband had the final word because he wrote words and then he put full stops at the end of them.”

Add to all this that two characters have a history of depression and related illnesses and a third character is constantly stoned, and you have yourself a thoroughly unreliable narrative. What seems like a quick, easy, fluid read becomes so much more than the sum of its parts.

Published 2011 by And Other Stories.
Shortlisted for the Man Booker Prize 2012.

I read this book as part of Discovering Daphne, an event/readalong run by Savidge Reads and Novel Insights. Unfortunately, a combination of bad planning and ill health means I’m a week late finishing this book but it does feel appropriate to have read the bulk of it at the seaside!

This was du Maurier’s debut, a love letter to Cornwall as much as a novel, but also an ambitious family saga. It covers four generations of the Coombe family, from 1830 to 1930. Each section concentrates on one family member, each of whom has inherited a wild streak, the “loving spirit” of the title. It starts with Janet, who wishes she had been born a boy so that she could go to sea and is never quite content with her devoted loving husband, for all that she does love him. Then there’s her middle son Joseph, the love of her life, the boy who really does run away to sea and have great adventures and lead women on while never loving any of them the way he loves his mother. Then there’s Joe’s oldest son Christopher who disappoints his father by not wanting to become a sailor, but with that old family restlessness ends up trying to make his fortune in London. And finally there’s Christopher’s youngest, Jennifer, a strong and independent woman determined to break away from her controlling mother and grandmother and return to the family’s roots in Cornwall.

It’s a beautifully written, warm, engaging book, but it does have its flaws. For the first two generations du Maurier has her characters speak in strong Cornish dialect, which added a certain country charm and “ye oldeness” I suppose but also smacked of condescension. Maybe that’s just me. The relationship between Janet and Joseph troubled me. I know that a mother and son can have a stronger bond than a husband and wife and there’s nothing wrong with that, but something about the obsessive quality du Maurier describes made this particular relationship a bit wrong. There were a lot of times when I felt that everything moved too fast, that there was too much sketching out what has happened while time passed and not enough current story. And I didn’t like how down on London du Maurier was, with absolutely nothing good to say about the capital, though at least she was kinder to Bristol when it got a brief mention.

But for all that I still greatly enjoyed the book. Each of the central characters was engaging and sympathetic and I did like the way the language of courtship developed from incredibly polite and formal to teasing sarcastic banter. The descriptions of the sea and Cornwall are so detailed and evocative that the town of Plyn was almost a character itself. In fact, while none of the love stories or deaths roused much emotion in me, the final homecoming to Plyn did bring a tear to my eye.

There’s a lot of what I would guess were du Maurier’s pet “issues” in this book. She clearly thinks country is better than city, especially for children. She doesn’t hold stock with prim and proper, preferring openness and honesty. She believes in children knowing the facts of life rather than it all being a frightening mystery. She believes in the strength of women, in them holding jobs and speaking their minds and having options beyond “wife and mother” if they want them. And she believes in good, honest, simple lives – hard work, loving family, friendly neighbours – rather than building fortunes or being fashionable. Which is all fine, though you might argue she presses the point home a little strong. Of the many many characters in this book the odd one who broke the general trend would have perhaps evened things out.

See also: reviews on Savidge Reads and Novel Insights. Next up in Discovering Daphne? The House on the Strand, to be discussed next Sunday.

First published in 1931 by William Heinemann.