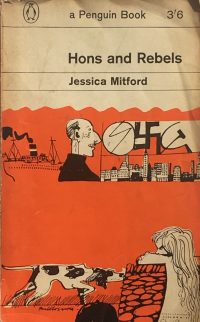 Hons and Rebels
by Jessica Mitford

I am not the first person to be fascinated by the Mitfords. For a few years now, I have felt that I need to read something by Jessica to better understand the family. She was the outlier, the one who left. And y’know, not a Nazi.

This is Jessica, or Decca’s, memoir of the first portion of her life. She recounts her childhood, her political awakening and her relationship with Esmond Romilly. I laughed, I cried, I shook my head often in disbelief.

As she admits, her childhood was unconventional. They were old-fashioned upper-class toffs, distantly related to royalty and less distantly to Winston Churchill. Jessica and her five sisters received no formal education (though their brother was sent away to school). They instead enjoyed a series of private tutors whom they teased and tortured. This meant they reached adulthood in a state that was both worldly and hugely naive and sheltered. Perhaps this explains the extreme political allegiances of at least three Mitford sisters.